The ballot count was delayed for more than three months by technical objections from the group’s former bargaining agent, NOWU. Finally, on February 8, the Ontario Labour Relations Board (OLRB) ordered the ballots be counted and announced a decisive win for workers wanting to be represented by CUPE.

“We’d pretty much been left on our own for years at Mt. Sinai. We were tired of not having our issues followed up on and not seeing action from NOWU,” said Julian Barkin, a full-time clerk in the medical imaging department. “It was time for a change, and CUPE has done a great job of keeping us informed about our rights throughout the pandemic. We’re all looking forward to seeing what we can achieve now that we’re part of a strong union.”

The roughly 183 full-time clerical workers join more than 100,000 Ontario healthcare workers who are already in CUPE. Over the last two years, CUPE’s hospital membership in the province has grown by several thousand members with the successful service and clerical representation votes at Unity Health Toronto and the addition of clerical workers at Campbellford Memorial Hospital.

The ballot box was sealed as a result of NOWU filing yet another Unfair Labour Practice complaint at the Labour Board alleging that the Employer was colluding with CUPE to get rid of NOWU as your union.

This matter has not been heard by the Labour Board and it is likely that it will not be dealt with until the Full-time complaint Decision has been issued as it will likely have an impact on this complaint as well.

NOWU wants you to stay with them now that they have been cleared on any charges of fraud. Well, that’s a pretty low bar. And while this may be true workers at MSH still have never seen financial statements from them which are required not only by their own Constitution but also under the Labour Relations Act. So, sure NOWU isn’t stealing from you but what does your money get spent on? Shouldn’t you know and shouldn’t you have a say?

CUPE locals are required to provide financial statements to their memberships on a monthly basis. All local finances are audited each year and reports are sent to CUPE National to ensure that local spending adheres to the Constitution and applicable laws.

This is just a flat-out No and a scare tactic. The laws in Ontario protect workers from losing their rights when you apply to switch unions. When a union files the Certification Application all your current rights and benefits set out in the Collective Agreement are ‘frozen’ this is what is called the Statutory Freeze period. This period lasts until you have your new Collective Agreement.

So, it’s understandable that NOWU may have found it difficult bargaining with your employer when they came in after SEIU because being such a small union they have limited funds to be able to take your bargaining to Interest Arbitration.

CUPE has a National No Concession Bargaining Policy. CUPE also has the expertise of a Health Care Coordinator, Researchers & In-house Legal Representatives to take your bargaining to Interest Arbitration where CUPE can easily argue that as a CUPE hospital local you deserve no less than any other CUPE local.

CUPE hospital Collective Agreements have two sections. The first is the Central section that is bargained with 55 of our hospital locals and the Ontario Hospital Association (OHA). The second is the Local Issues section. This is bargained by your local bargaining committee directly with your employer. The Local Issue bargaining is meant to deal with issues that are unique to your workplace such as, you guessed it, scheduling.

CUPE locals send out bargaining surveys to their members to determine what the local issue priorities are for their members. Locals have representatives from their local at both the Central and Local bargaining tables.

I’m sure a small union of 2000 members would find it difficult to understand the Central Hospital bargaining process which bargains for tens of thousands of members.

CUPE has never said anything about whether you will be able to take your seniority with you from one bargaining unit to the other. Honouring seniority between bargaining units is an issue that MSH members will have to determine whether they want to have or not. This can often be a highly contentious issue with differing opinions among members. This is an example of why members make the decisions on issues that impact members, not CUPE National.

What CUPE has said is that if one group gets left behind in NOWU it will be even more difficult to move from a part-time job to a full-time job or vice-versa. Right now, as a part-timer in NOWU, you can only apply to a full-time job if there are no successful applicants from the full-time unit just like any other employee at the hospital.

If all the bargaining units are CUPE then you are able to negotiate language that lets part-timers be able to apply to full-time jobs prior to them being offered to the rest of the hospital.

CUPE is not SEIU or any other union for that matter. CUPE is built on local autonomy and transparency. CUPE is membership-driven and transparent. CUPE is the leader in the hospital sector because CUPE negotiates stronger collective agreements and represents ALL its members.

It’s time for a Real Union

A real union does not: 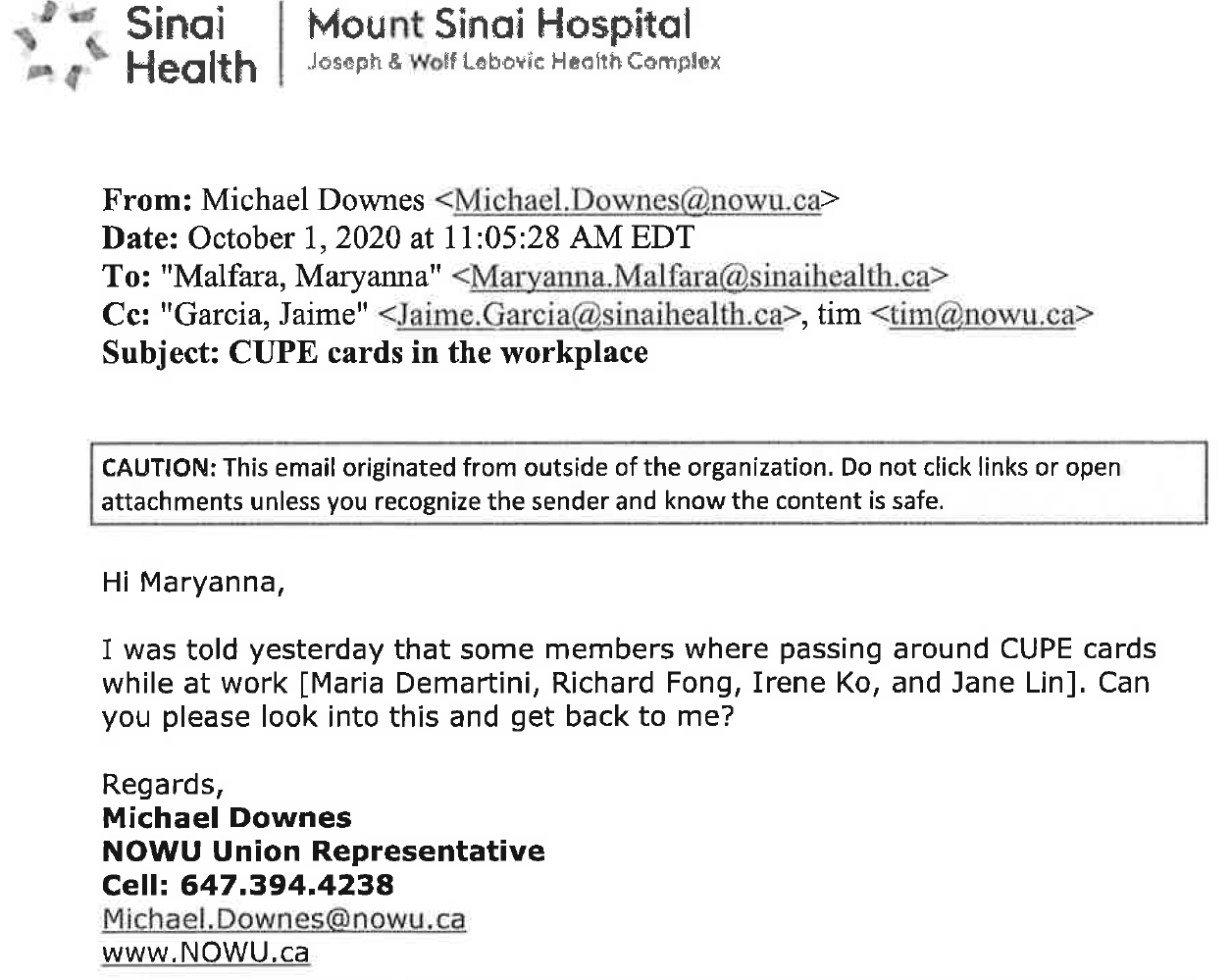 Click here to see the unfair labour practice complaint that NOWU filed with the Labour Board against CUPE and your Employer that is delaying the vote results for the FT Service and Clerical vote at MSH.

Click here to see CUPE’s response to the complaint.

Click here to see your Employer’s response to the complaint.

CUPE is a democratic union that puts its members first. As a CUPE member, you will have a strong voice in your workplace and in your union.

CUPE is a transparent union, click here to see a CUPE’s Constitution which is set by the members from across the country at CUPE’s Convention held every two years. 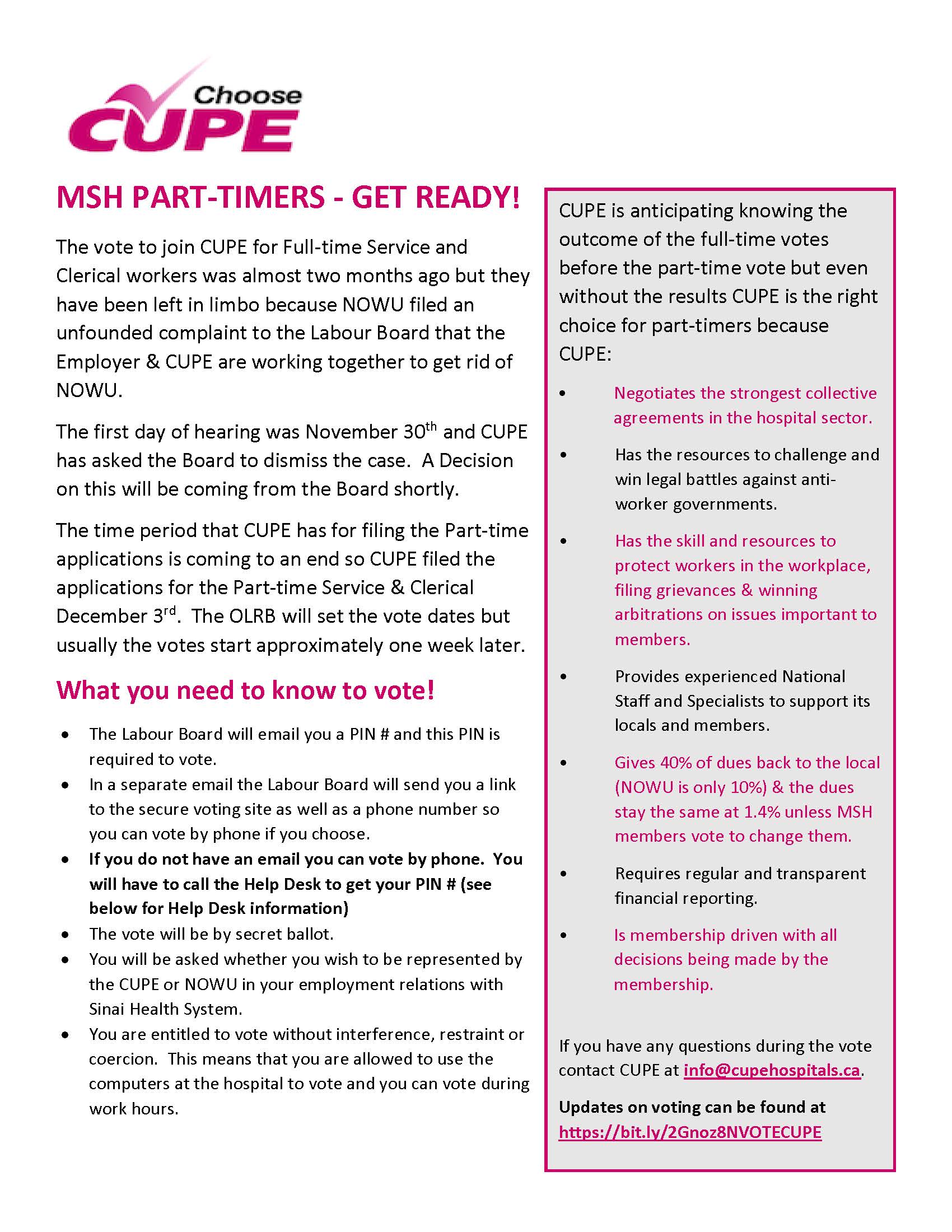 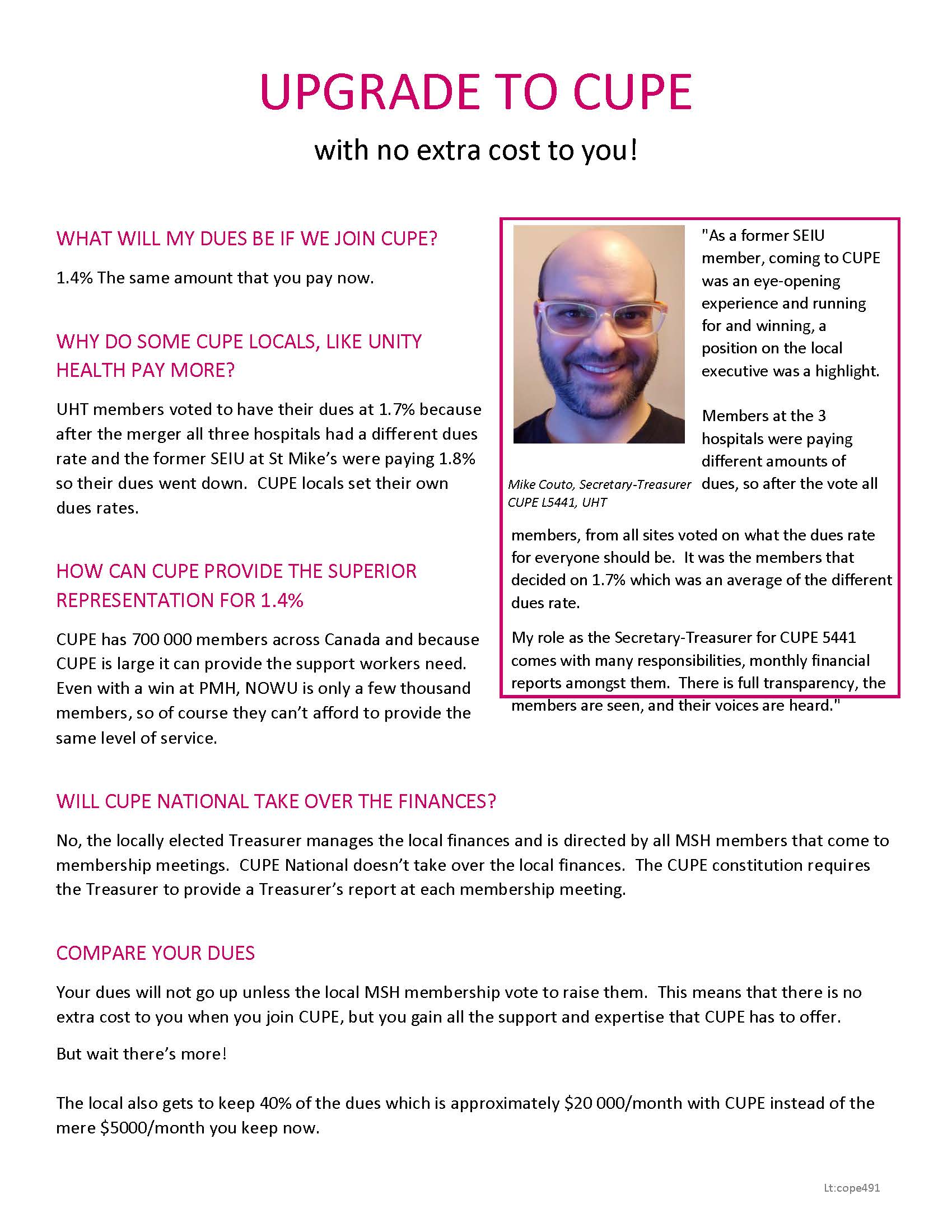 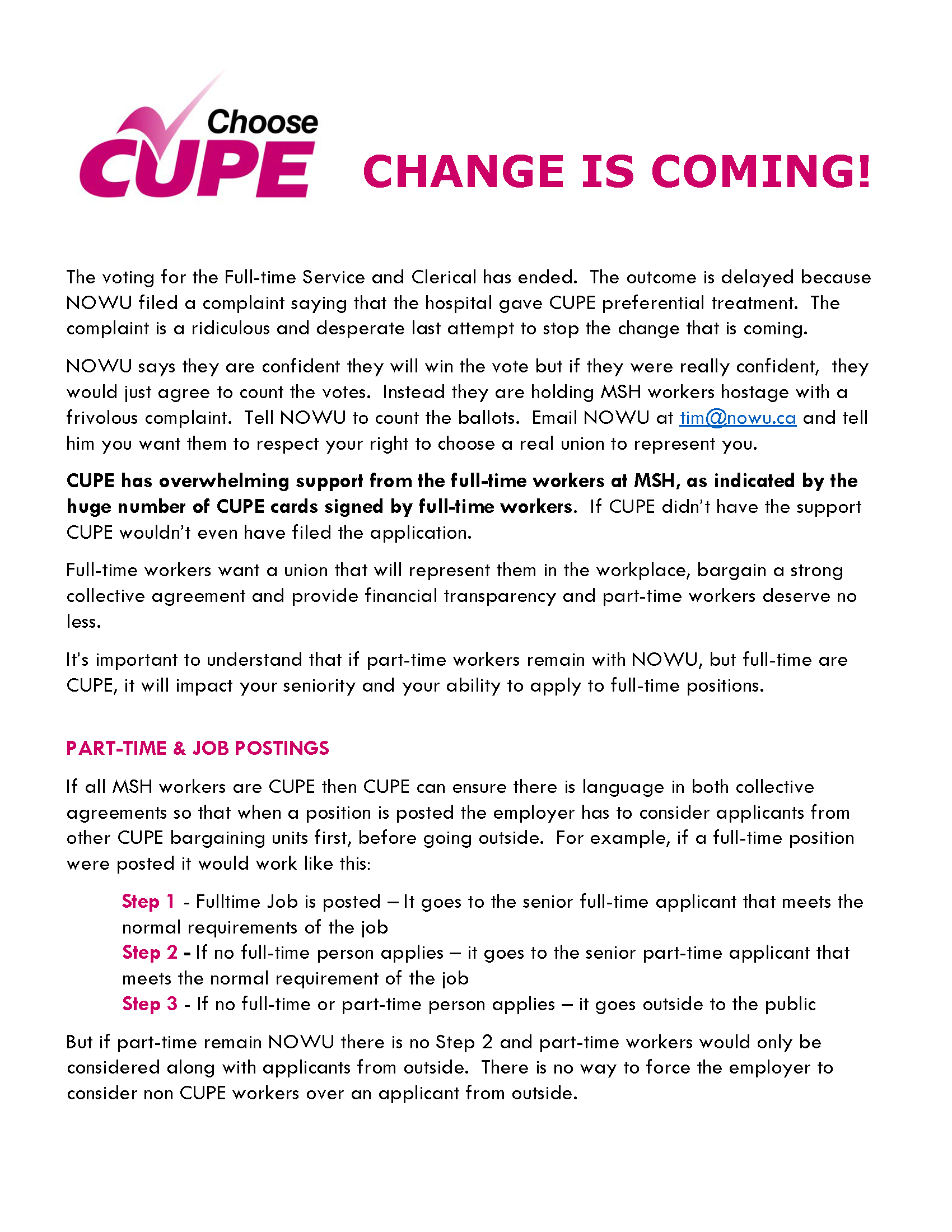 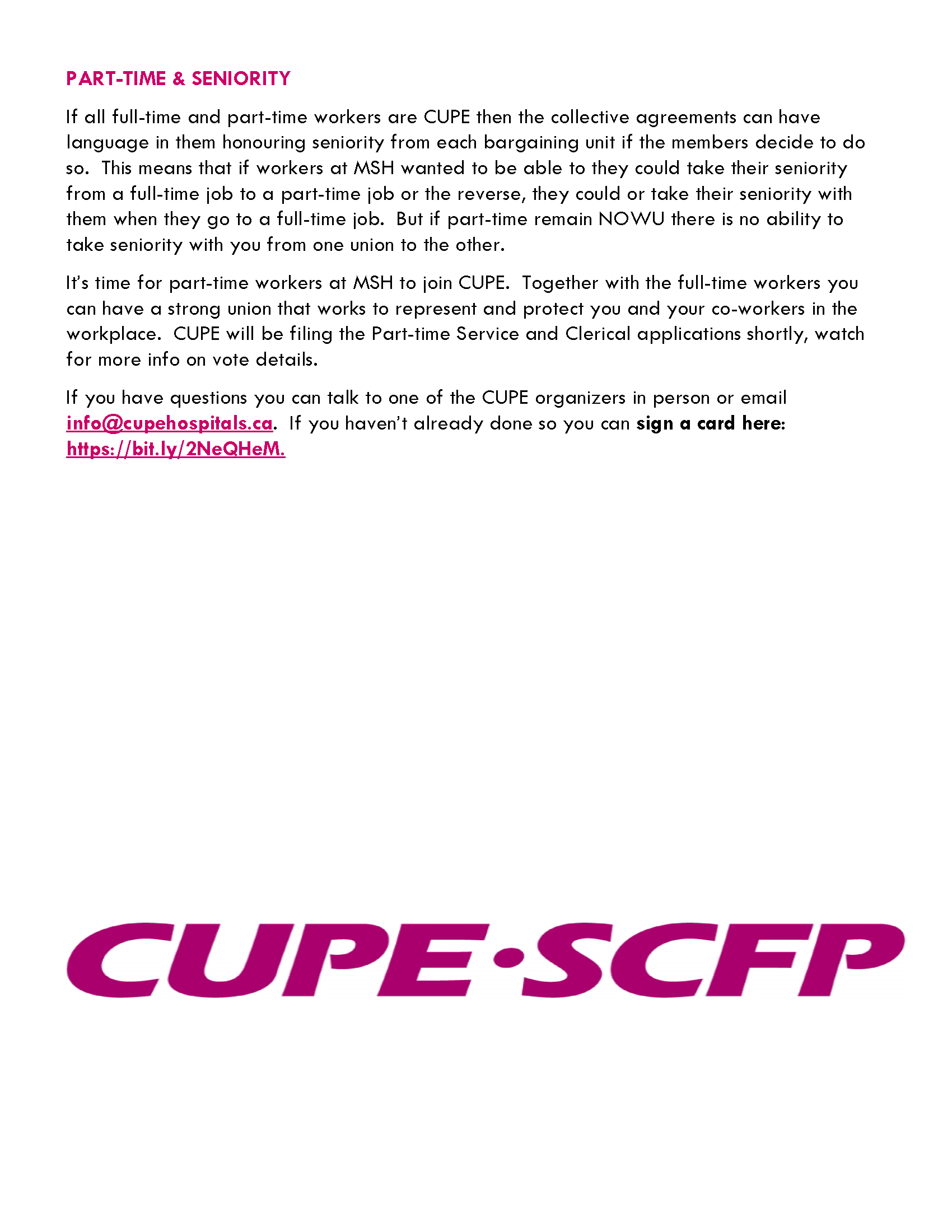 It’s Time to Vote for change 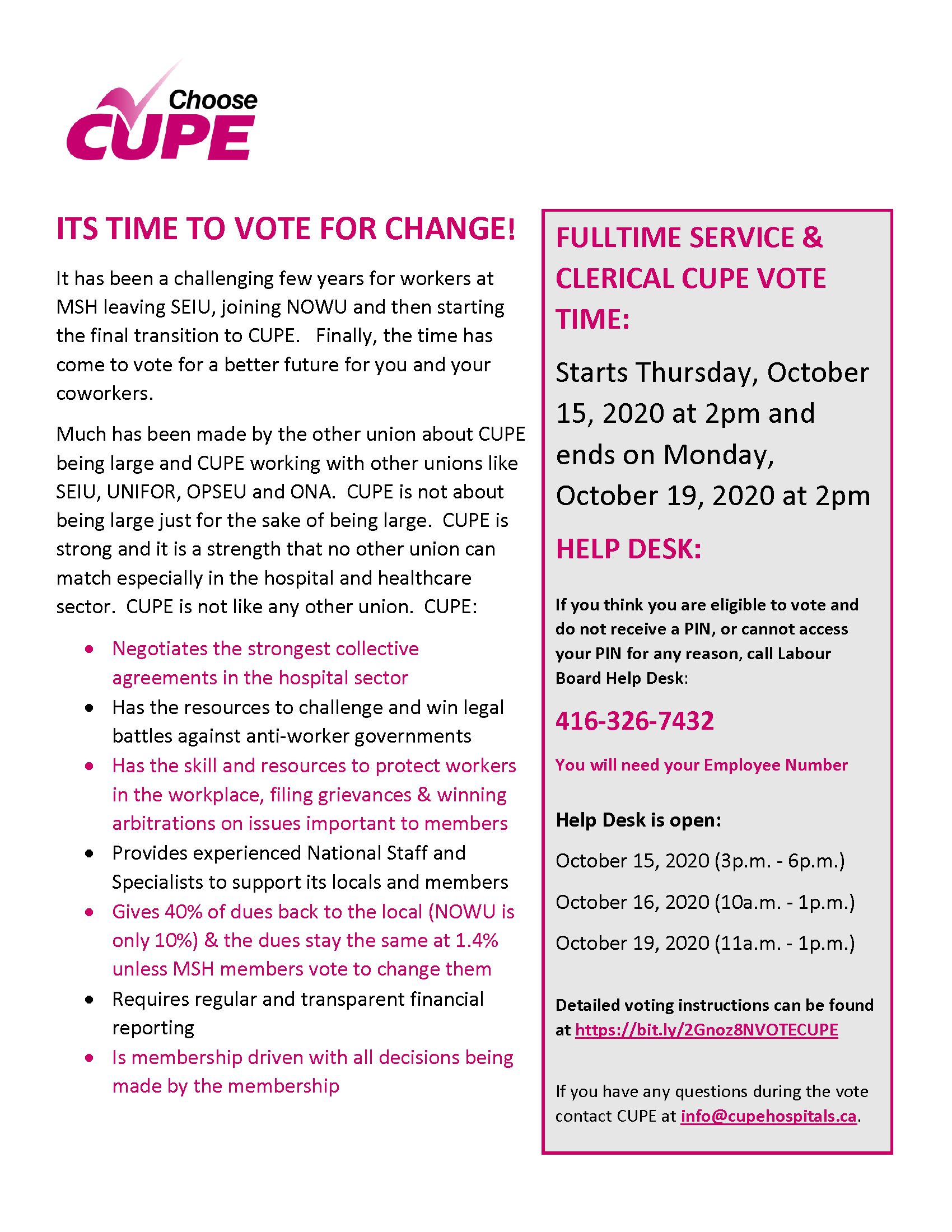 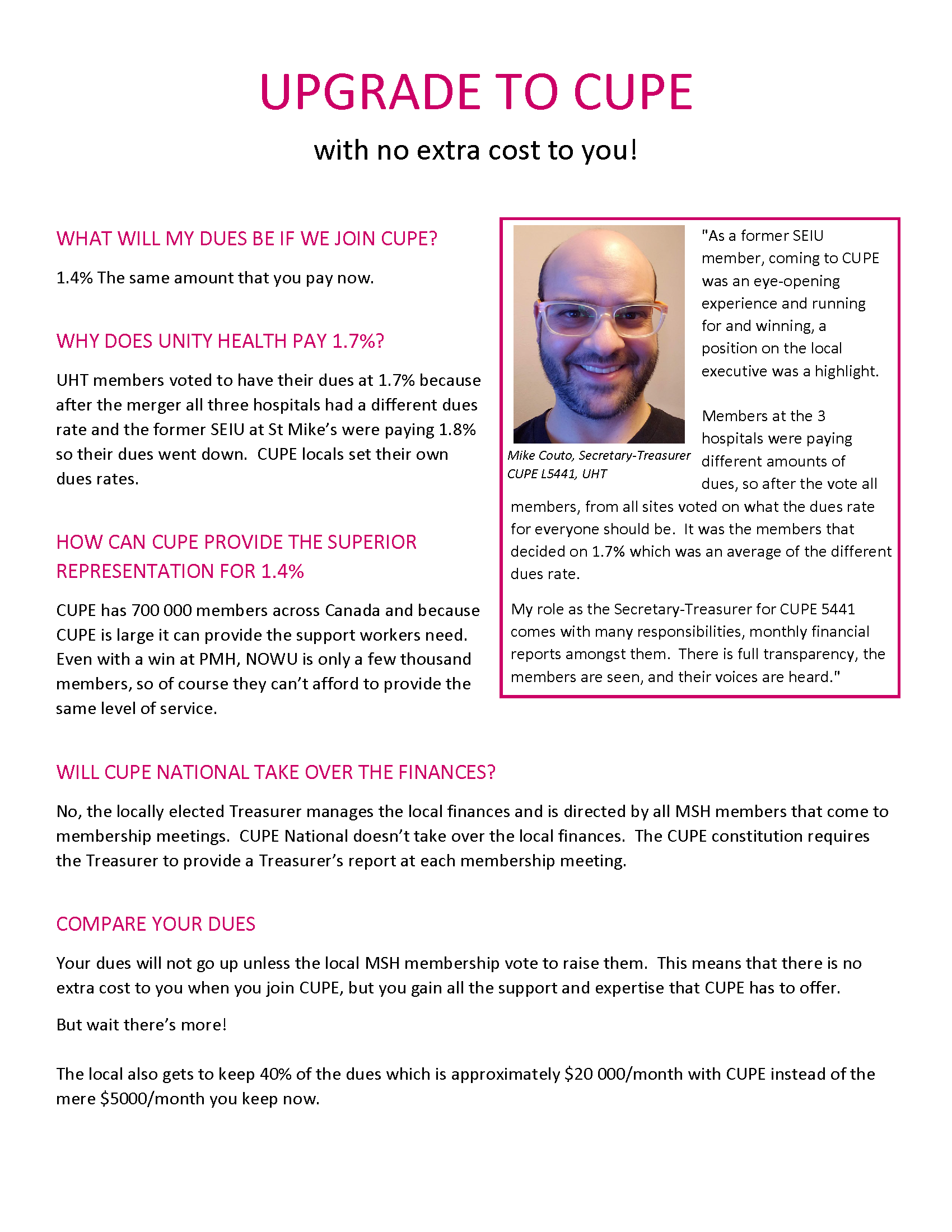 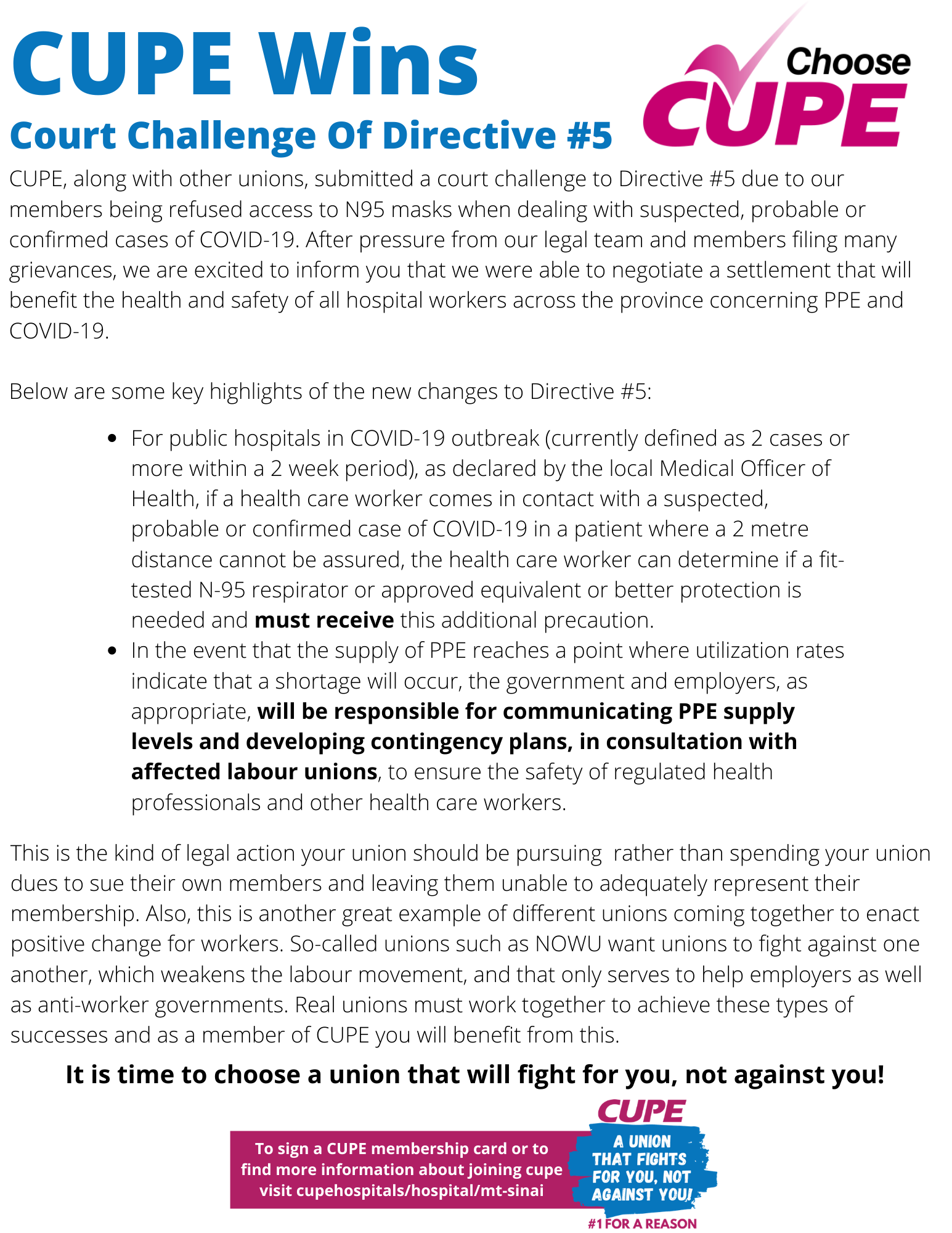 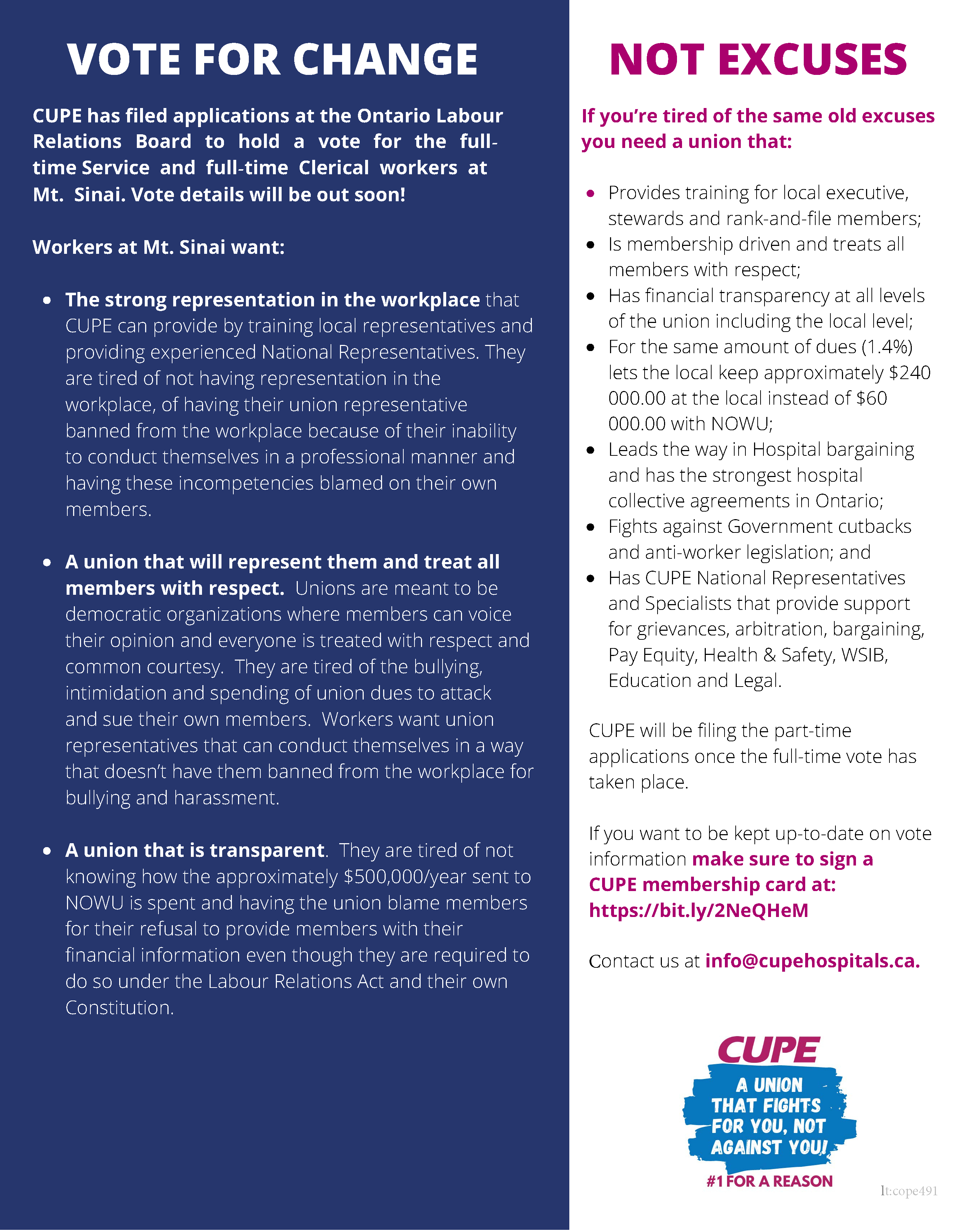 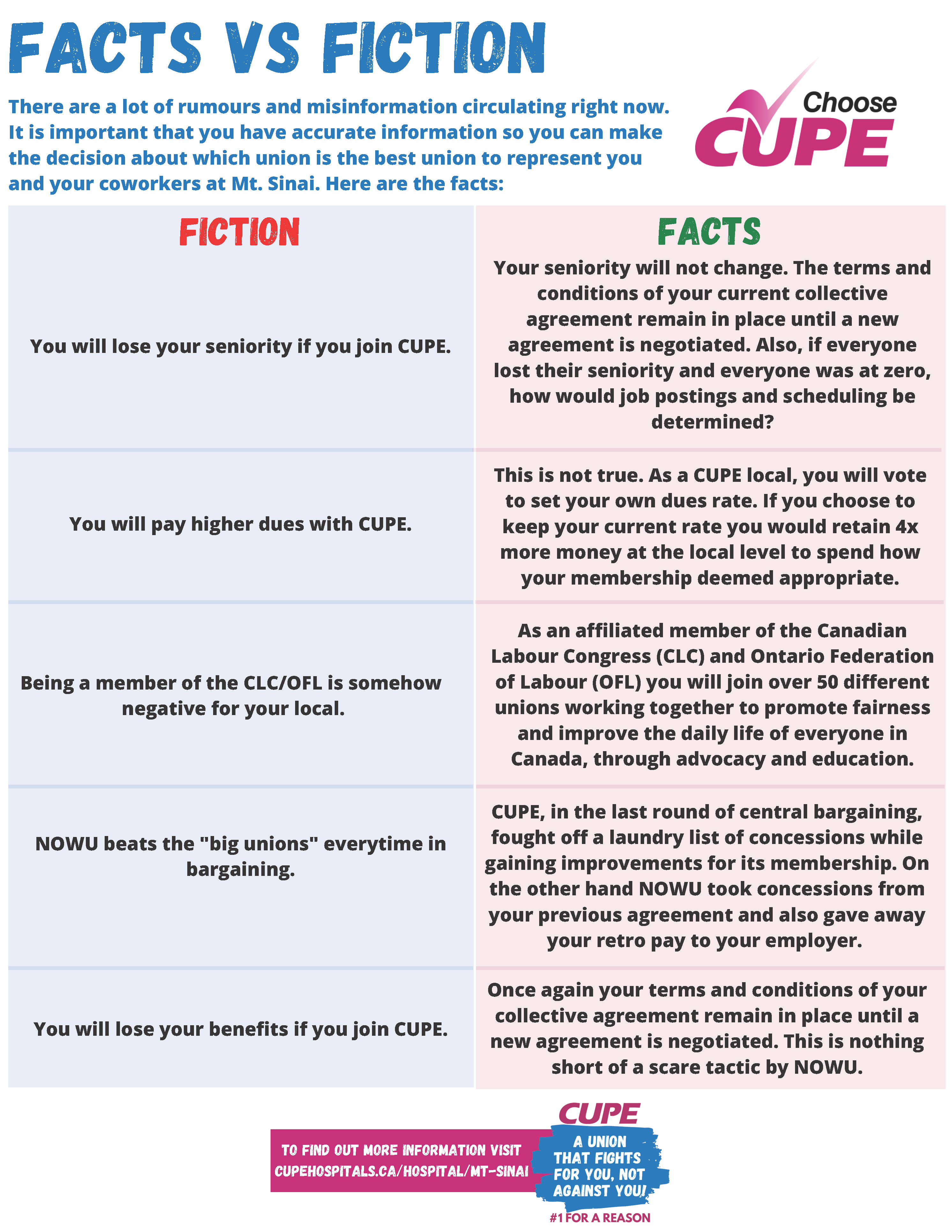 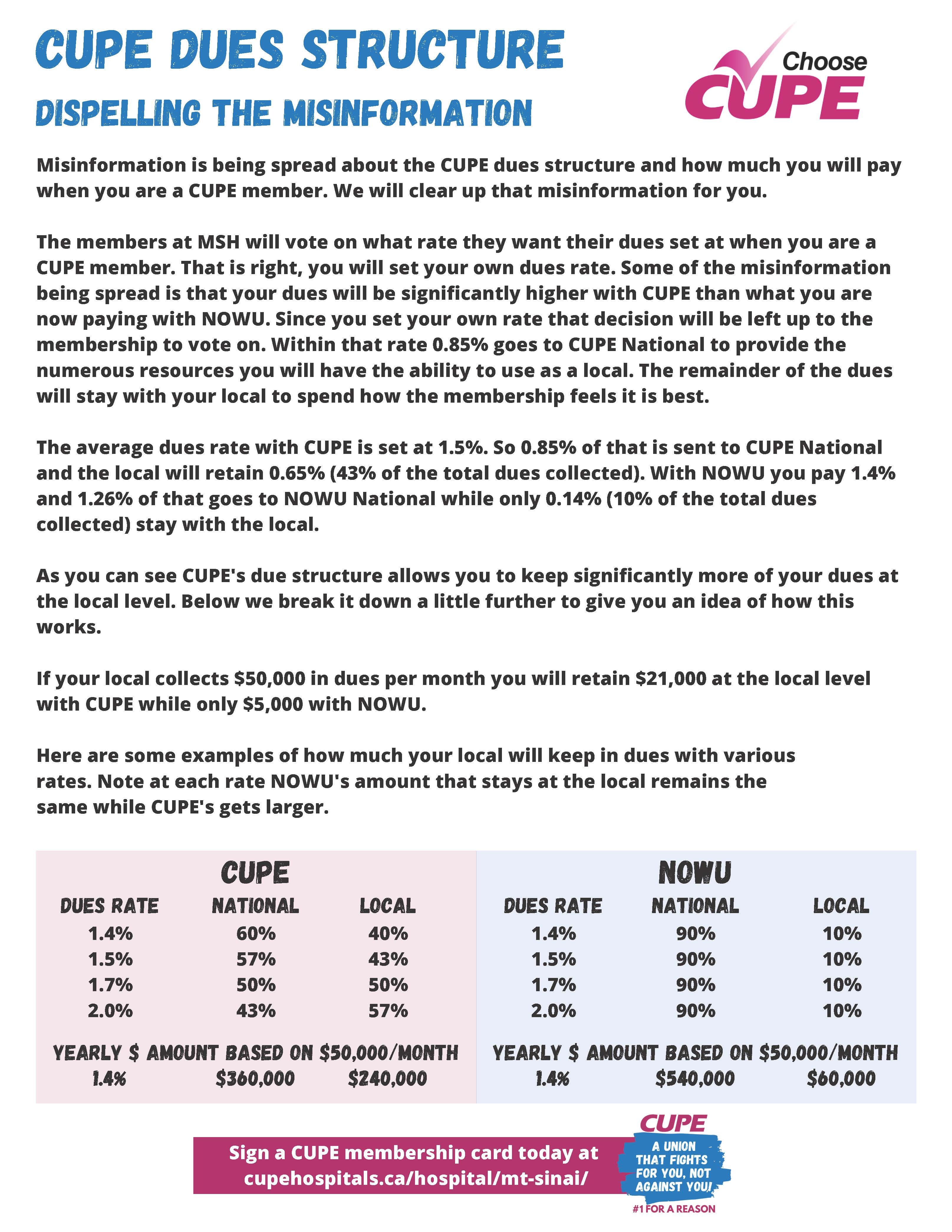 It Is Time To Choose 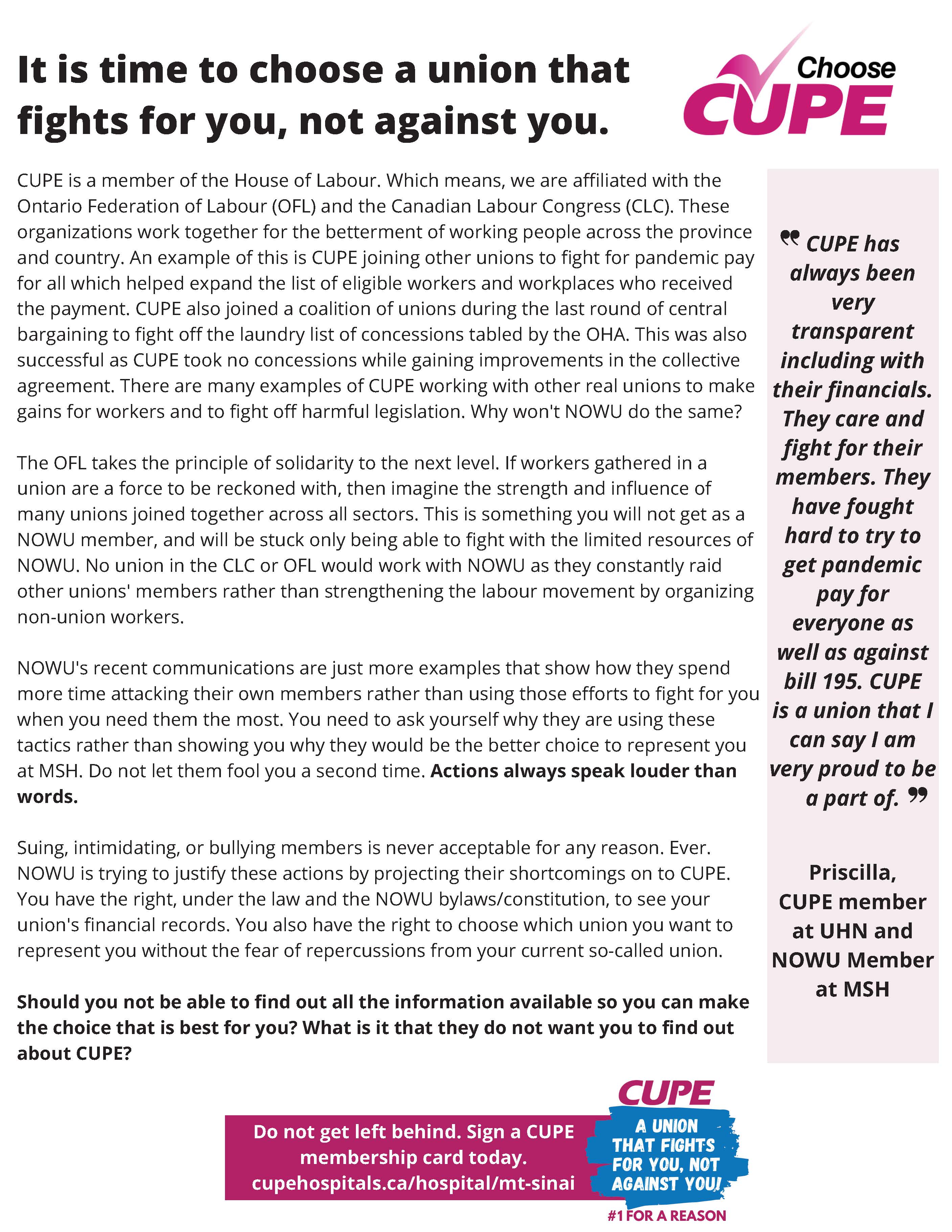 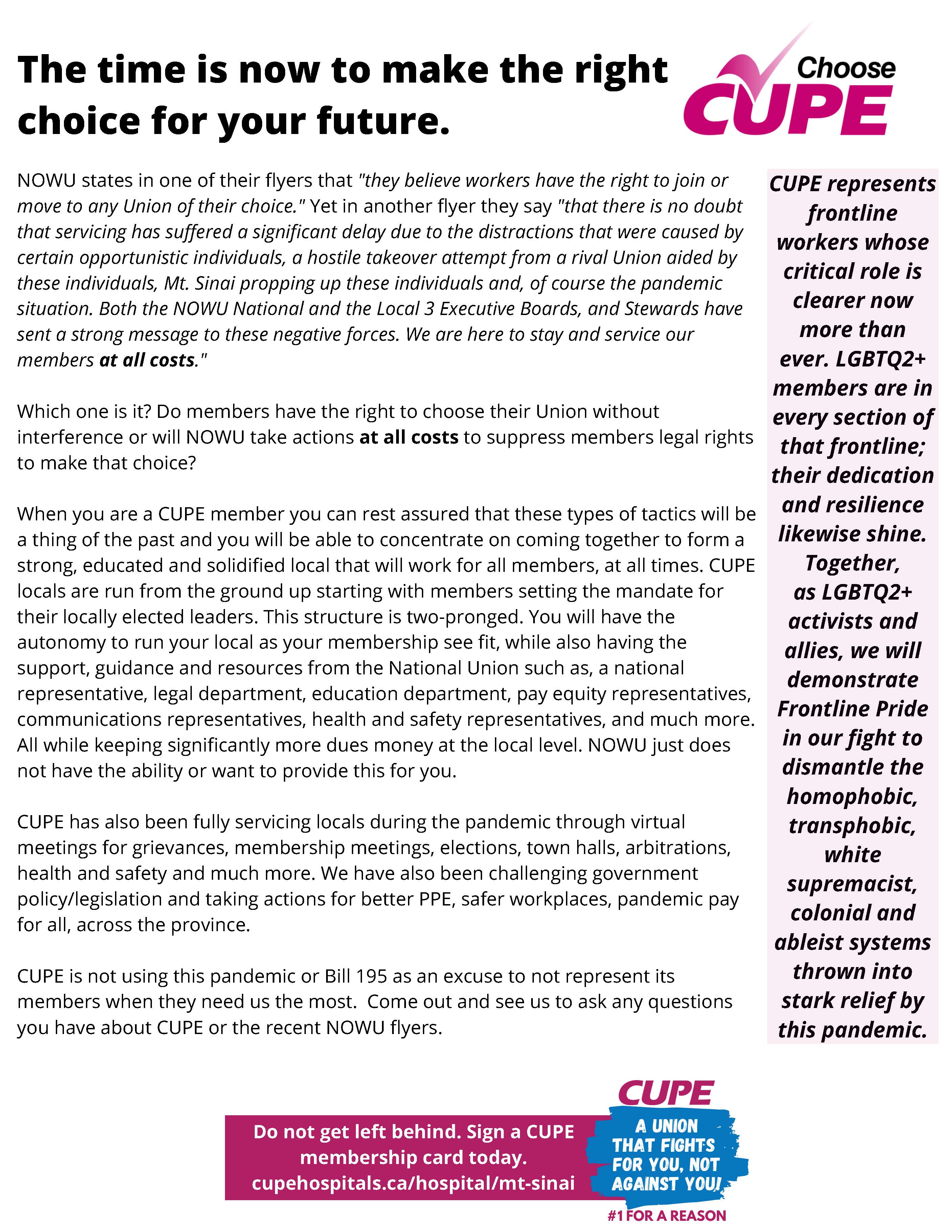 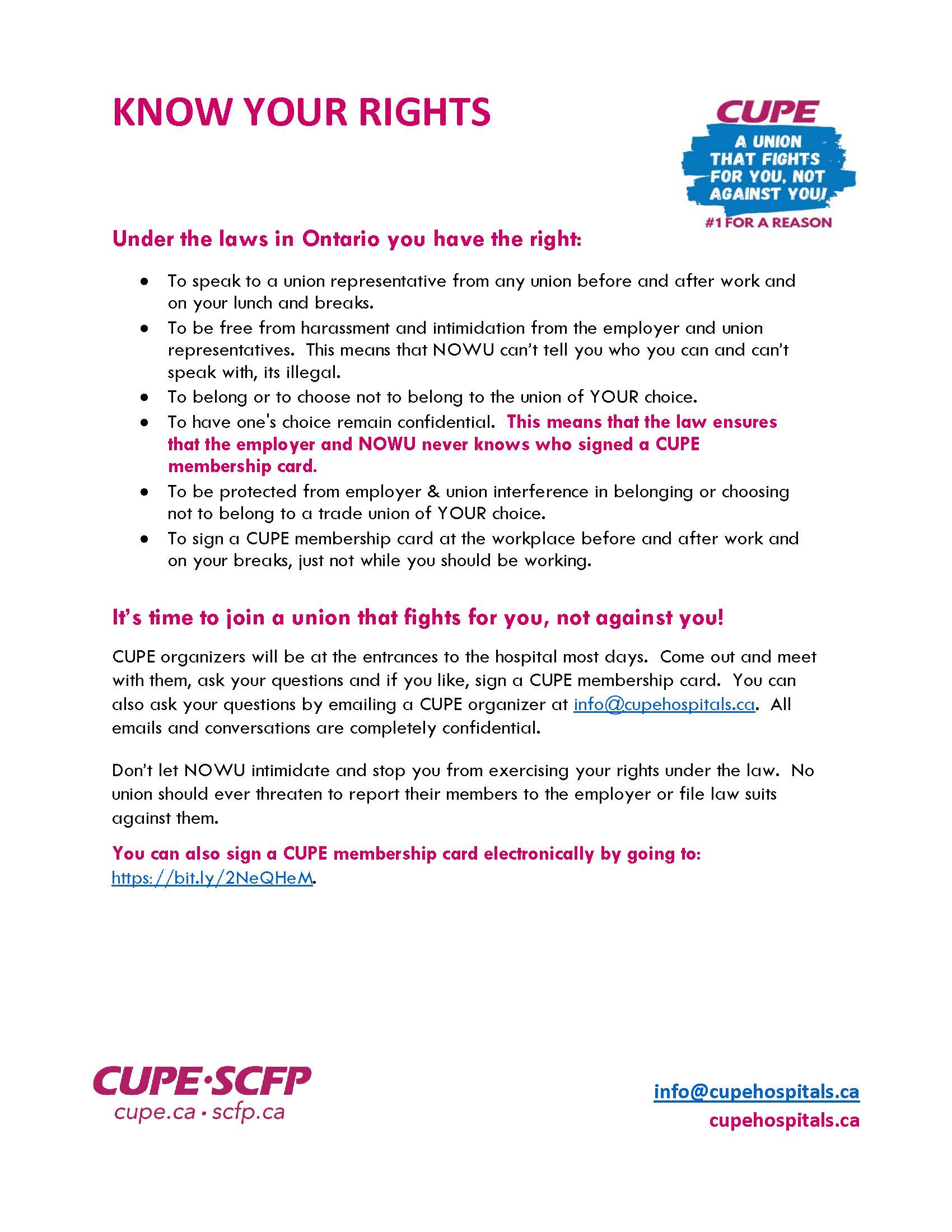 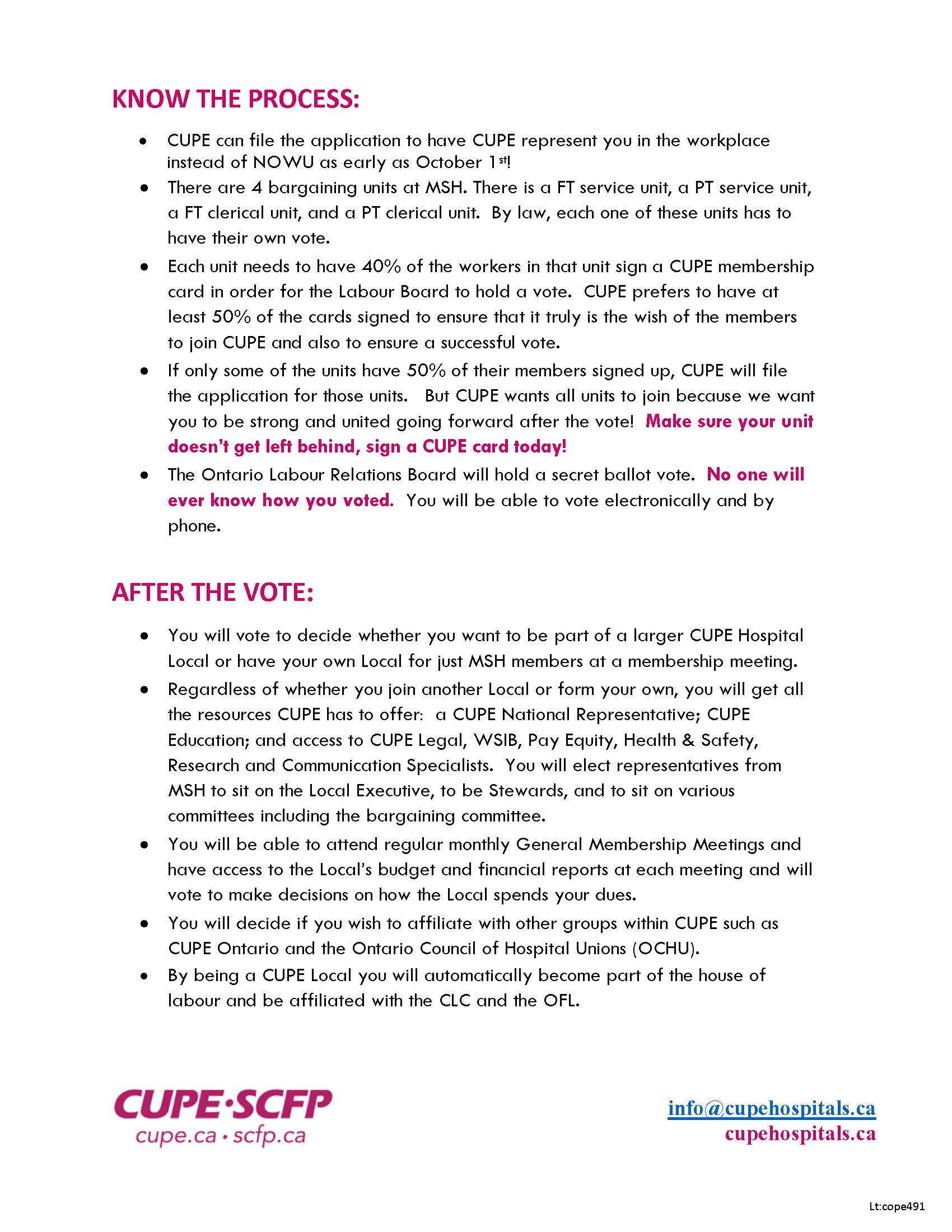 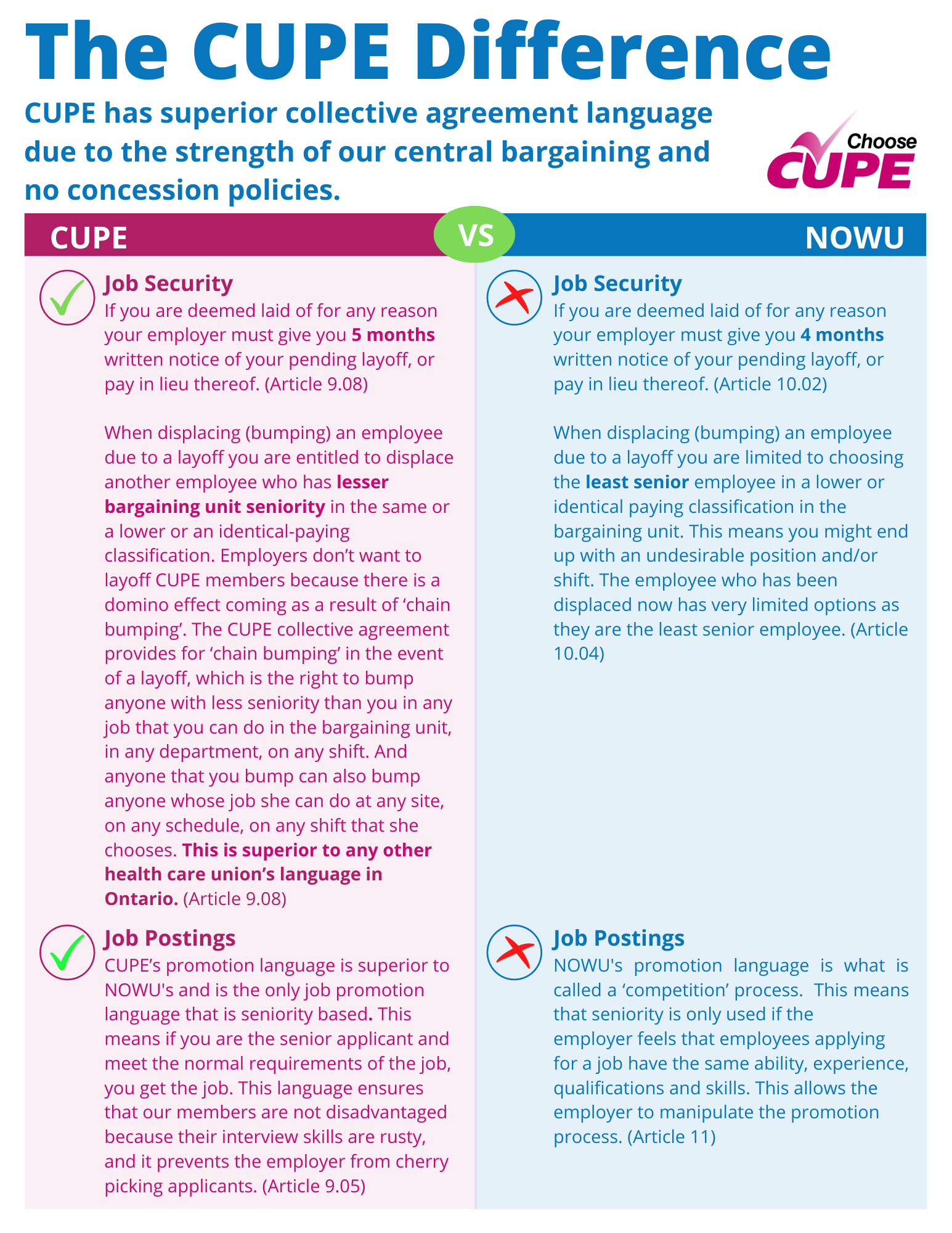 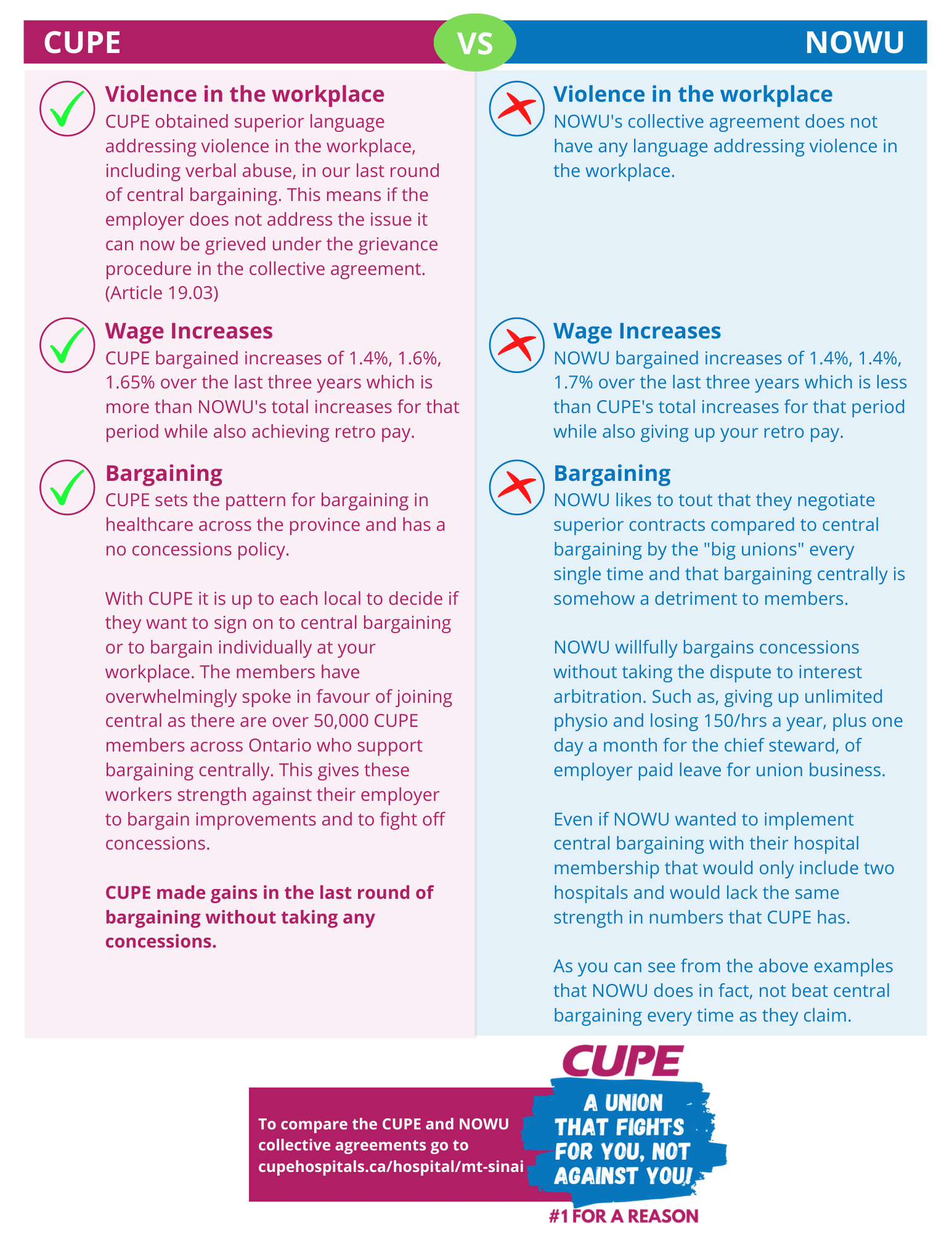 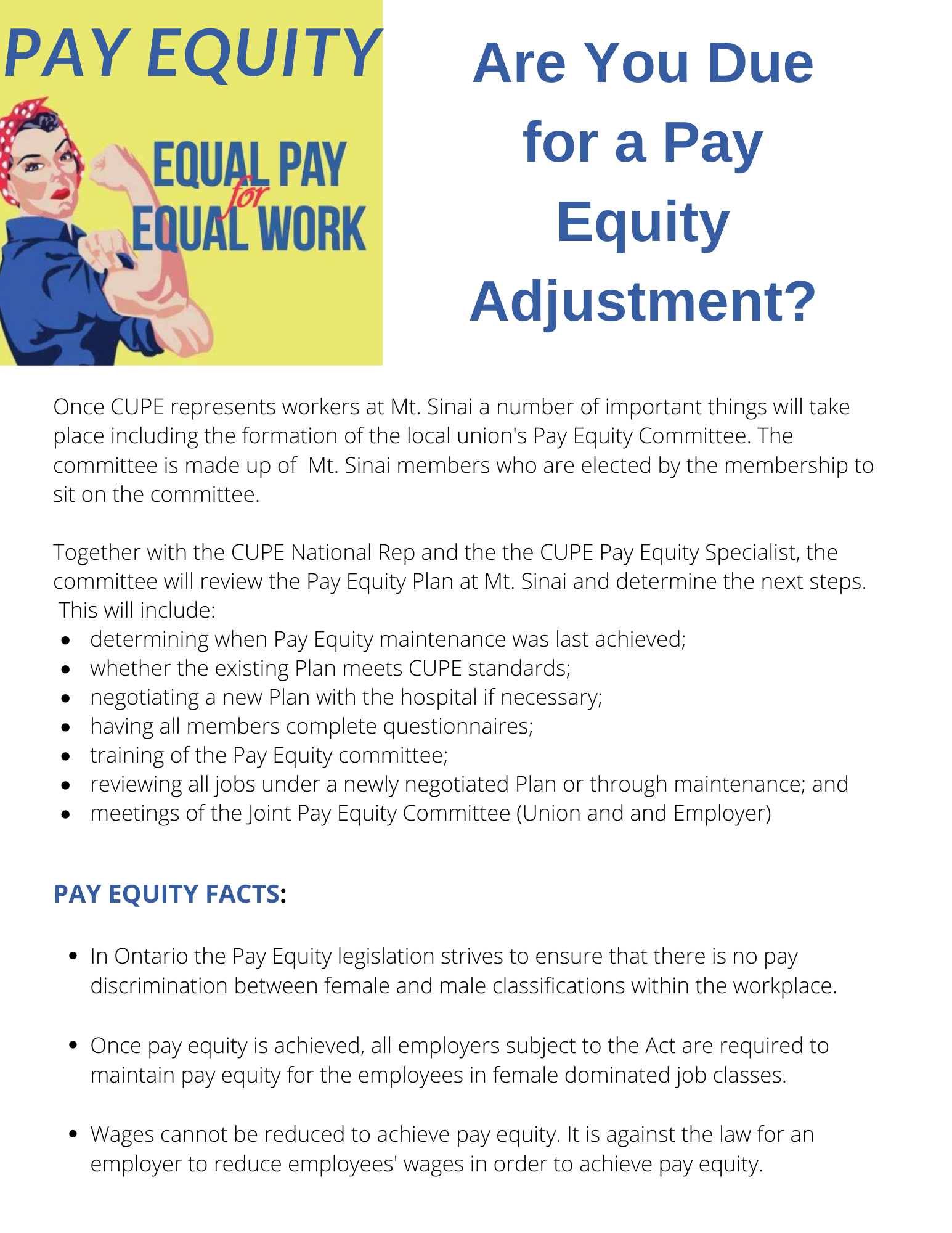 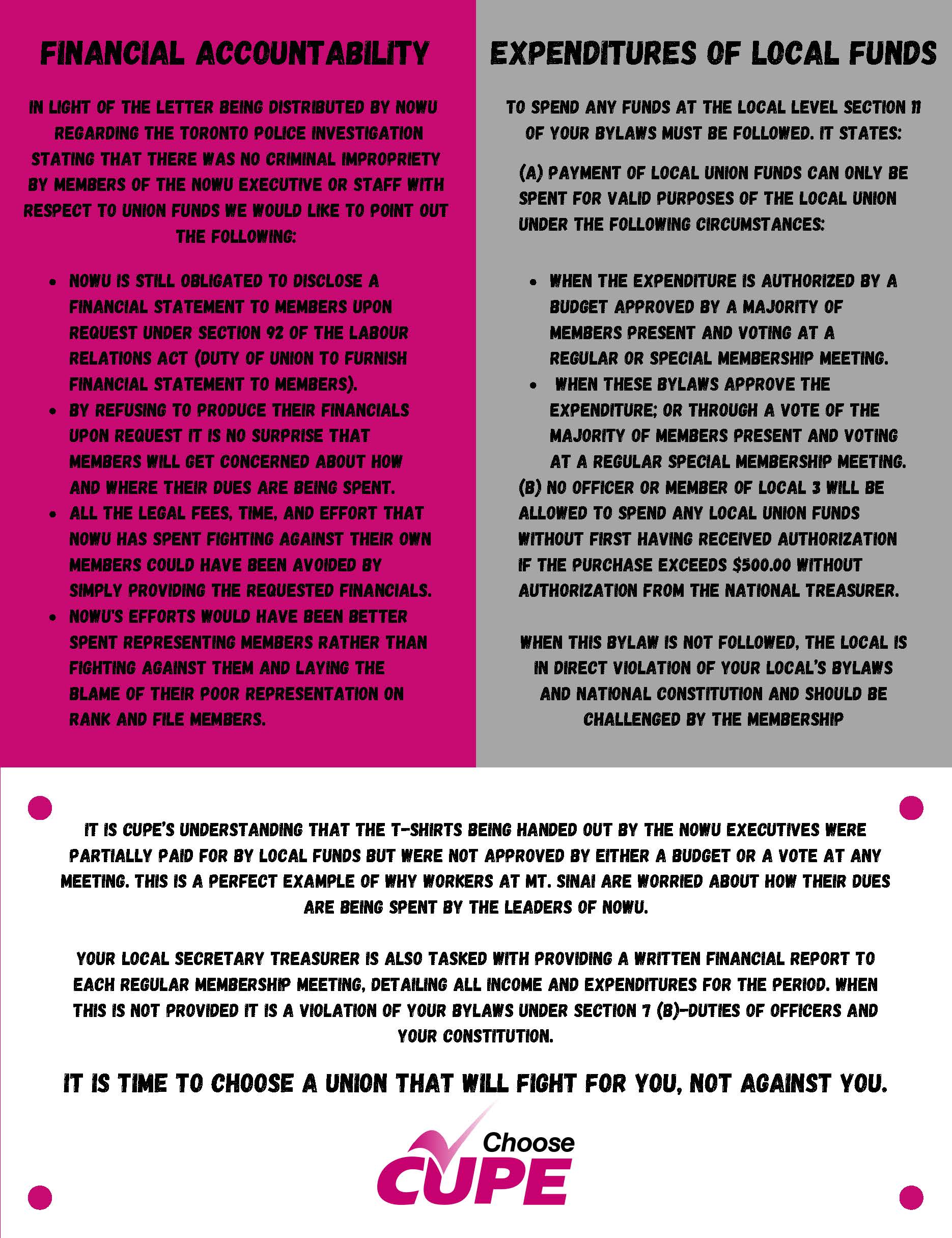 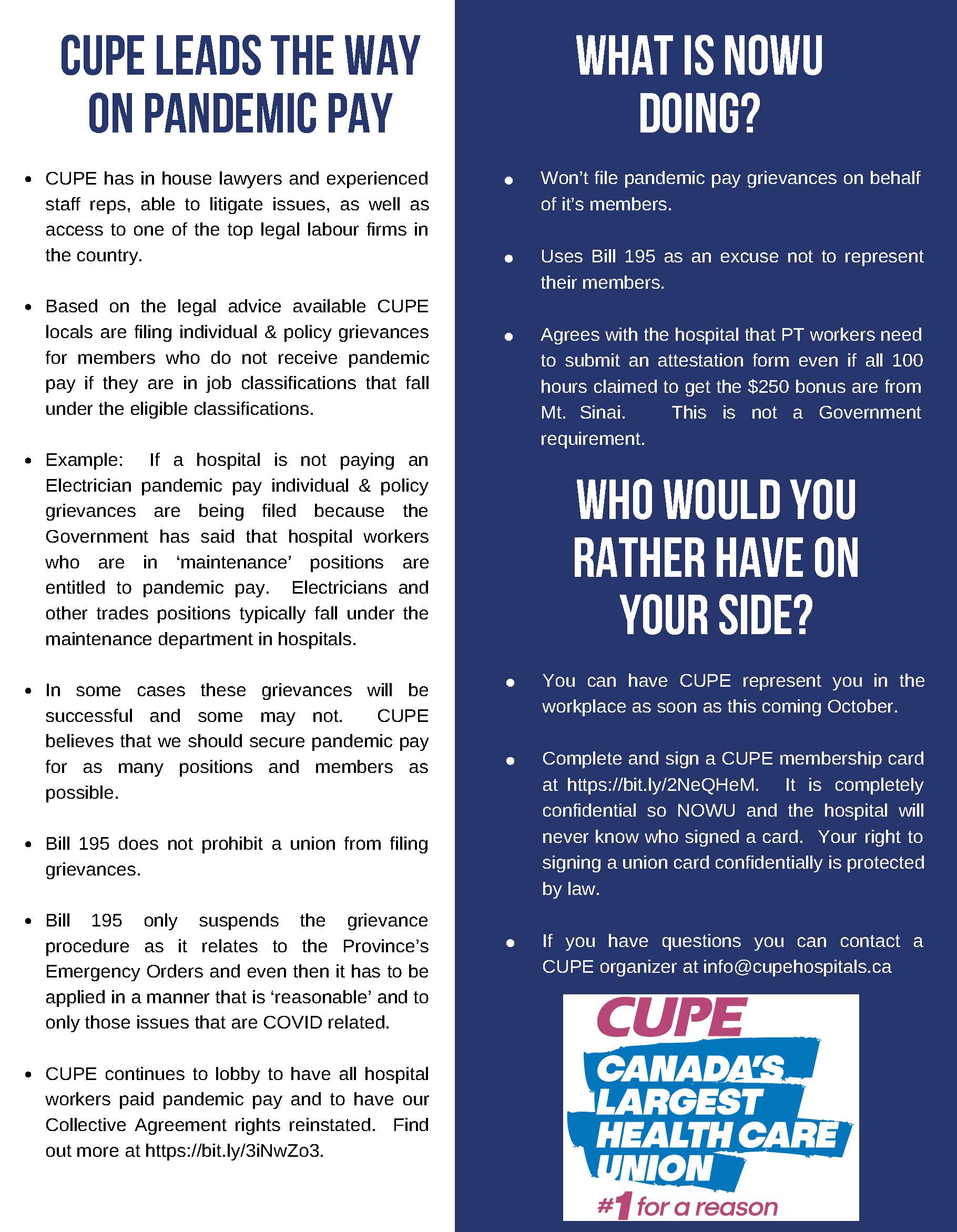 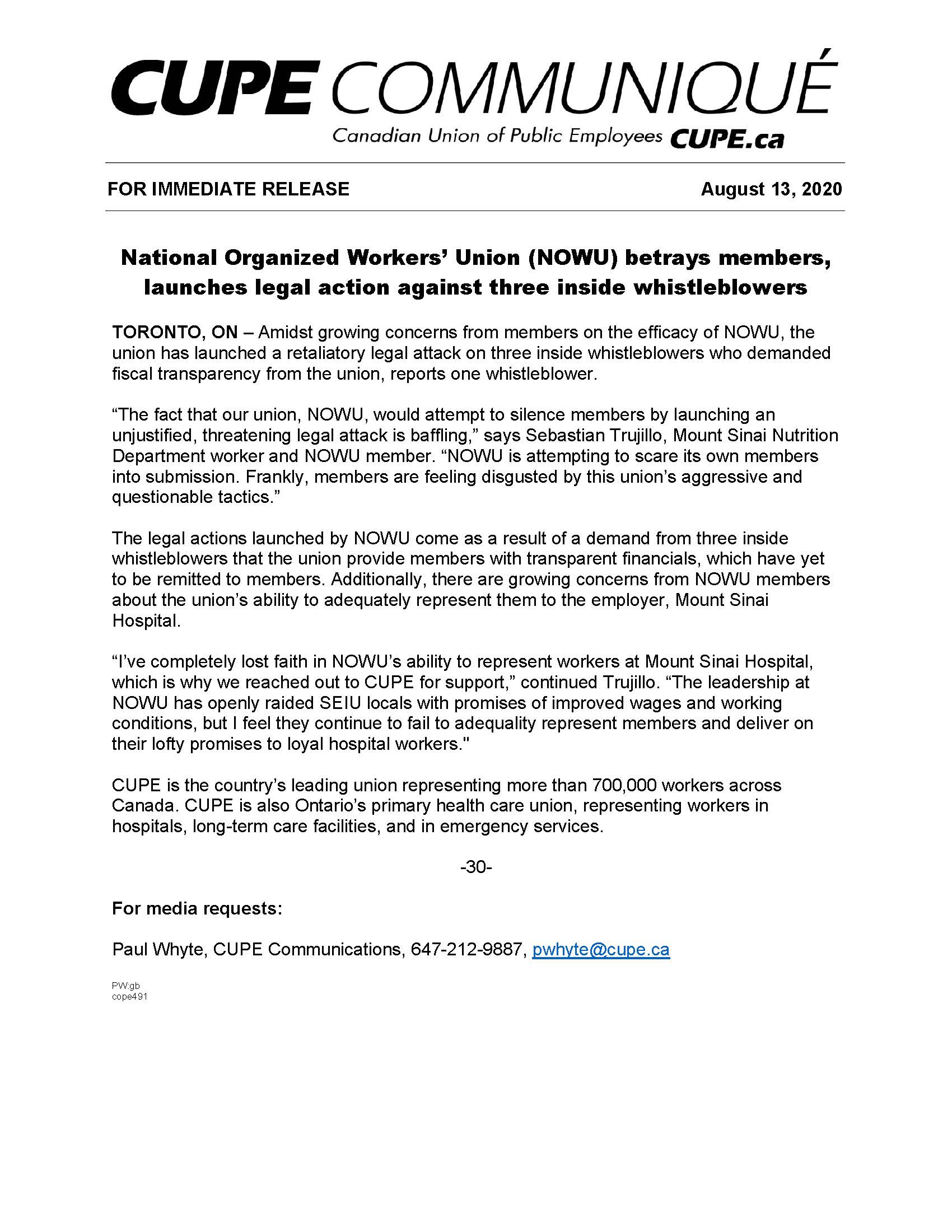 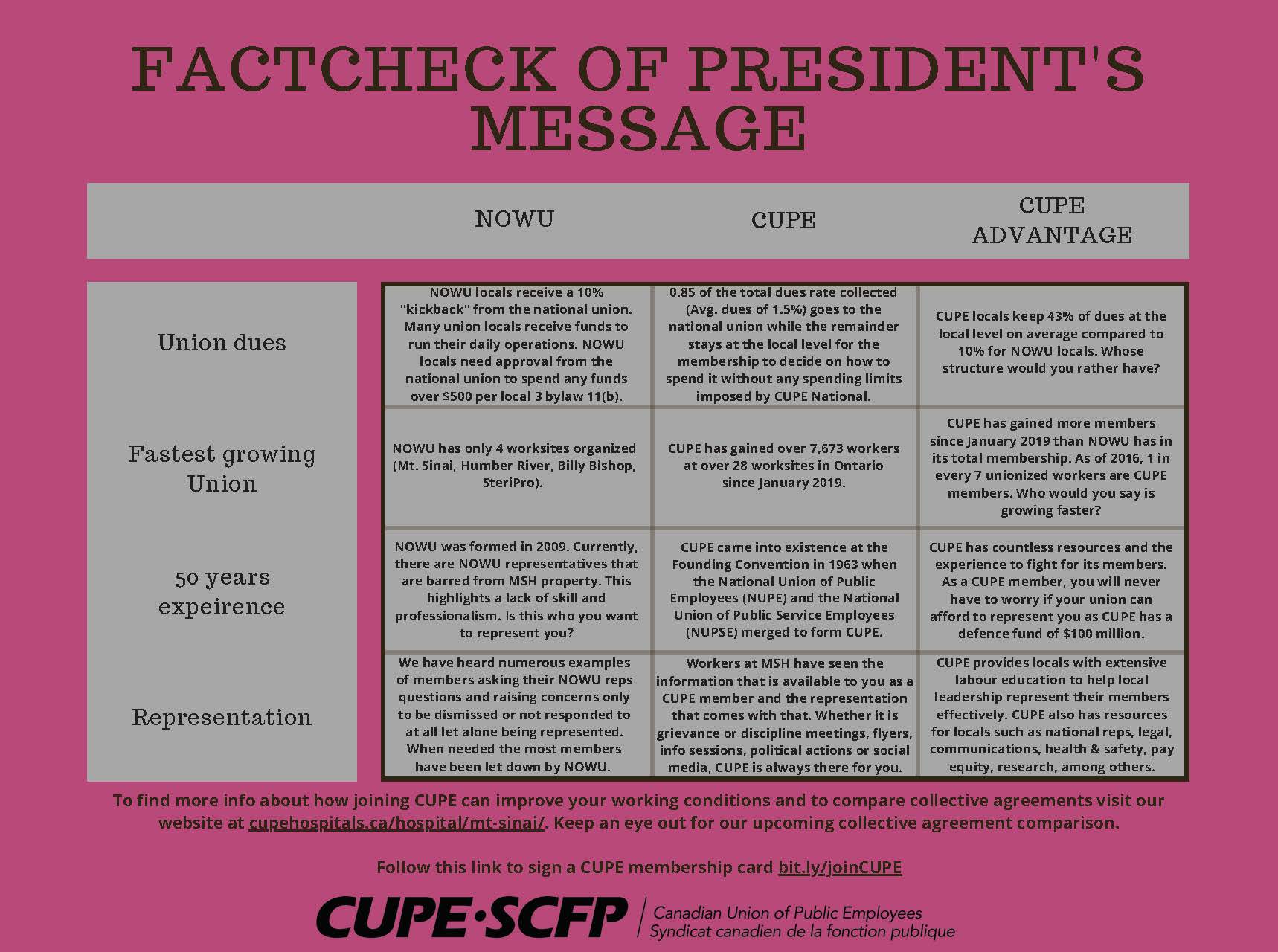 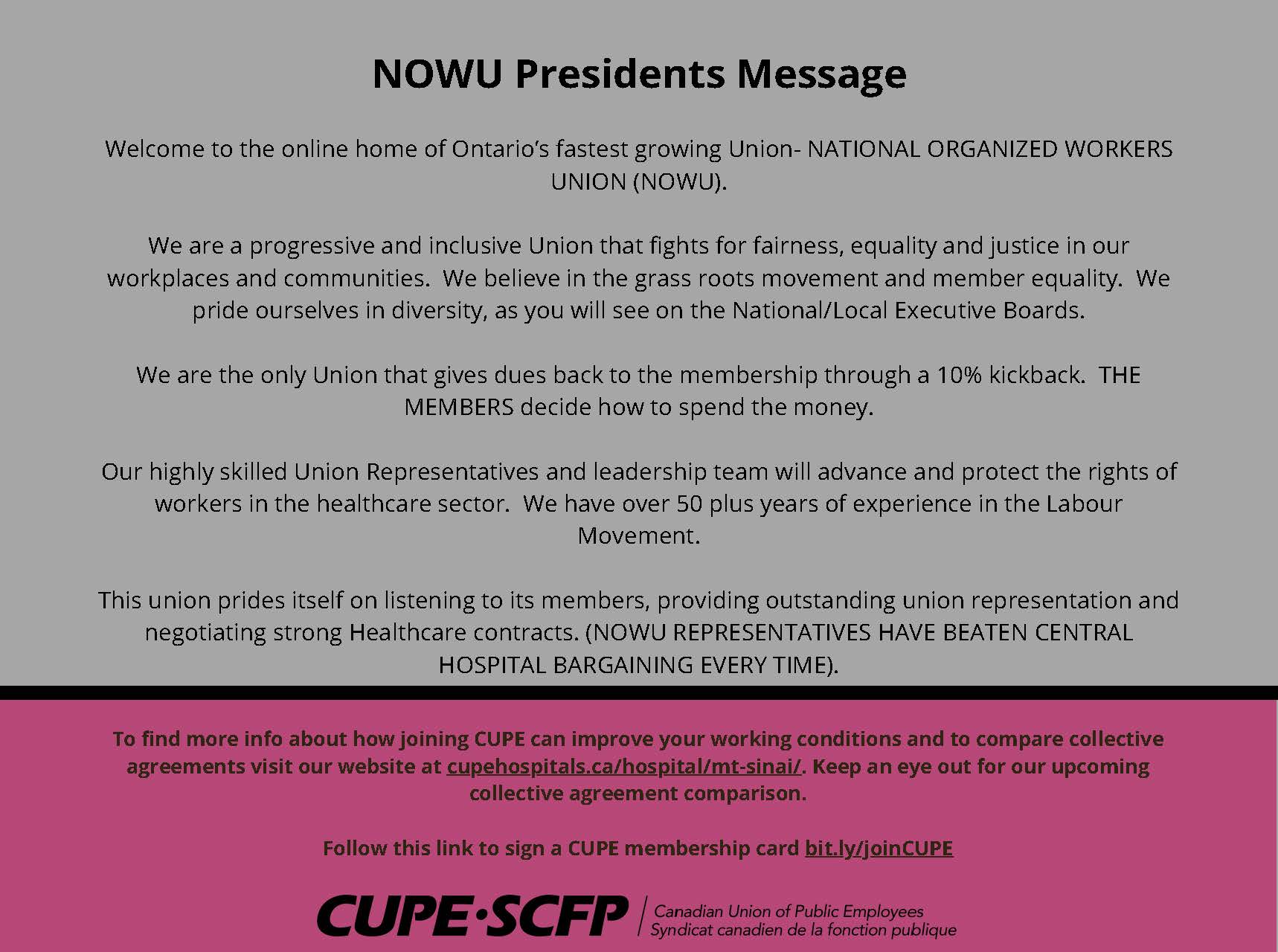 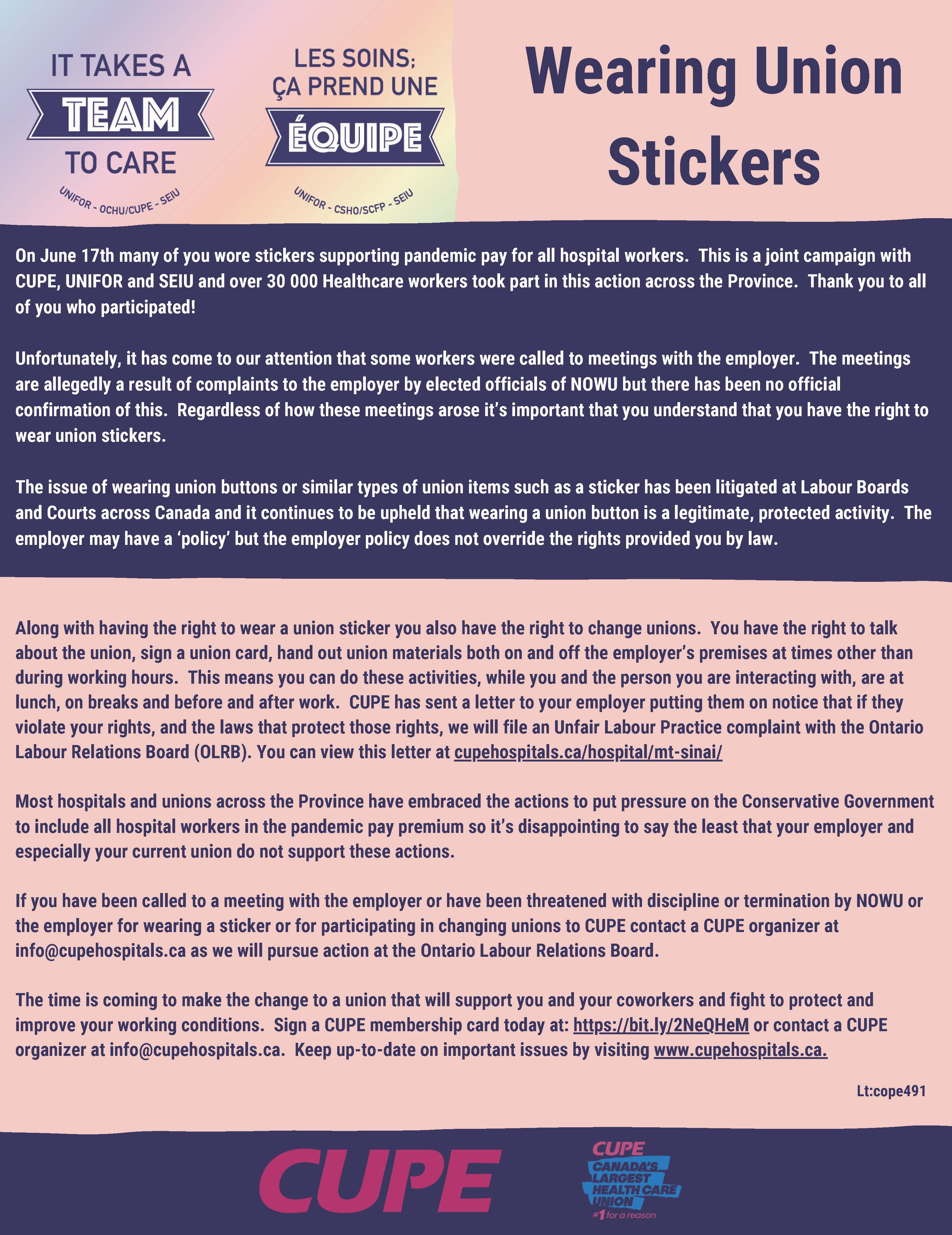 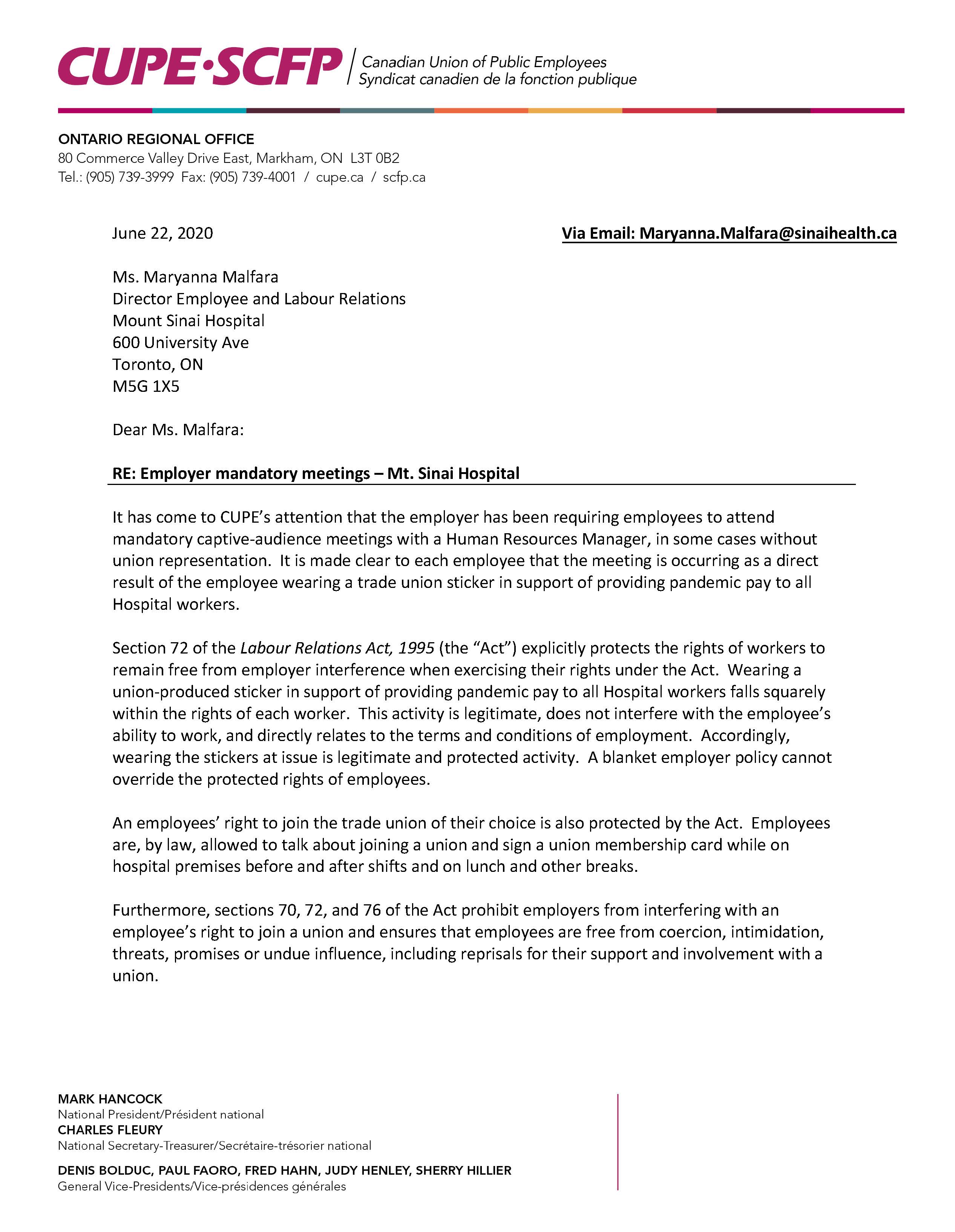 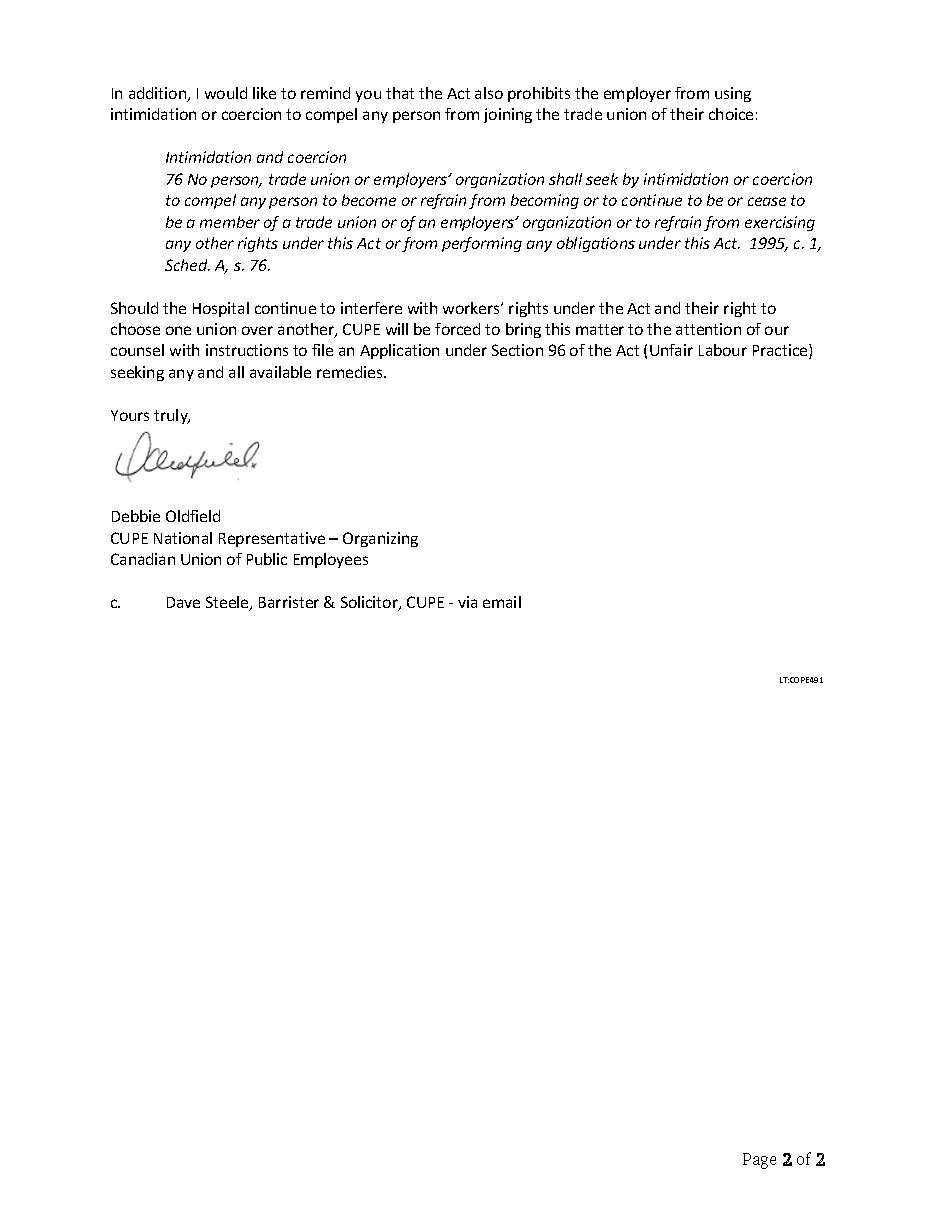 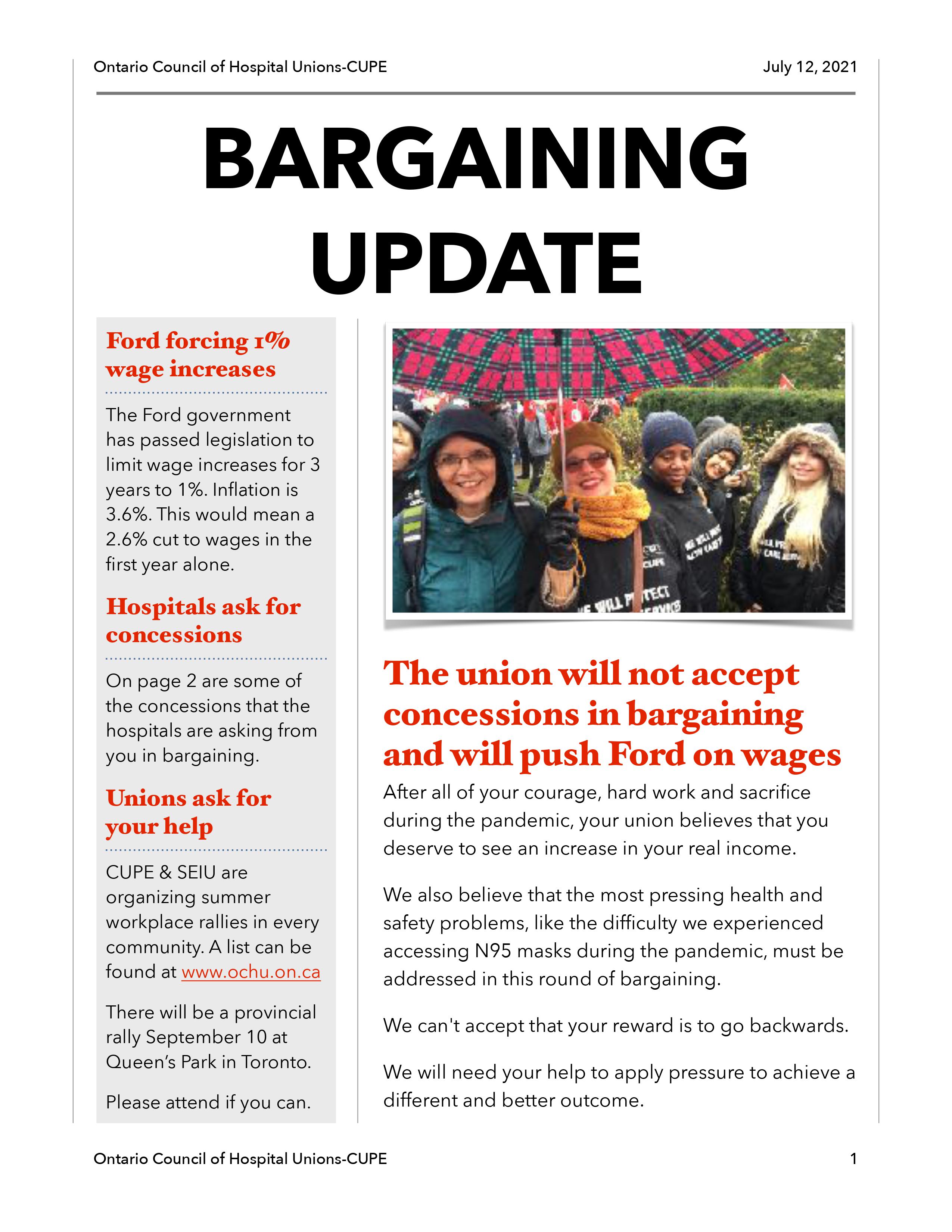 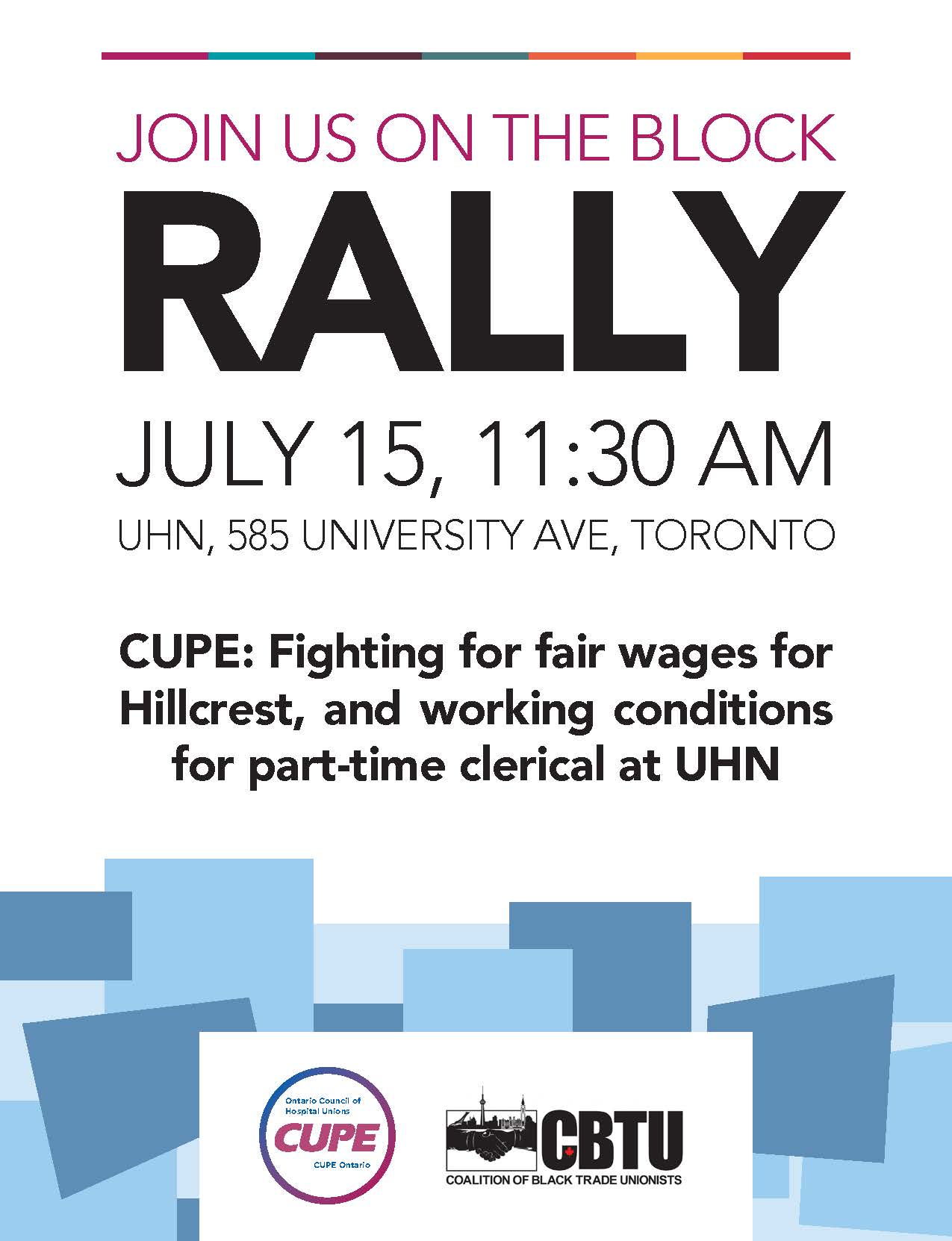 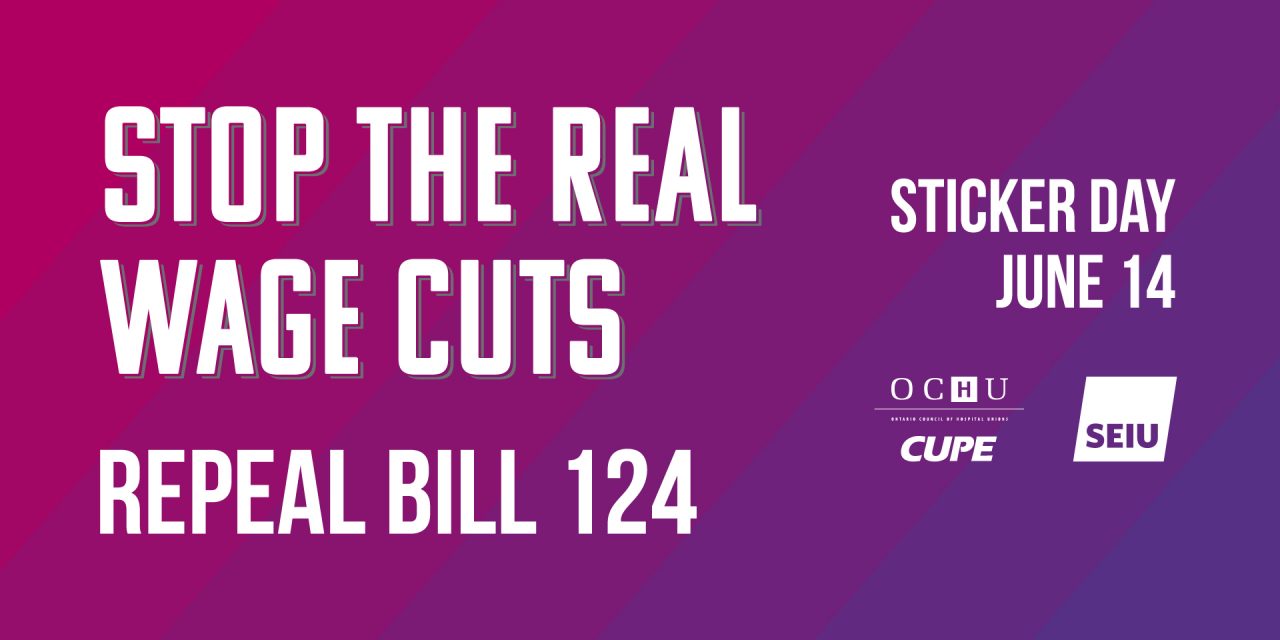 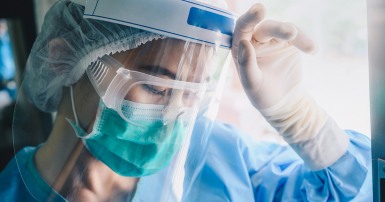