Re: Aerosol Transmission of SARS-CoV-2

We are writing to you on behalf of the Ontario Council of Hospital Unions (OCHU)/CUPE, the Service Employees International Union – Healthcare (SEIU), and Unifor. Together, we represent over 100,000 members working in hospitals and long-term care facilities across Ontario. We are among the frontline workers at the forefront of protecting the most vulnerable in our society from the impact of COVID-19.

On November 10, 2020, we wrote to you and the head of Public Health Ontario (PHO) expressing our concern that Ontario’s public health guidance documents are out of step with the federal government and out of step with the current state of scientific knowledge about how SARS-CoV-2 spreads. On December 11, 2020 we wrote to the Premier to follow up on our letter and copied you and Ms. Geiger. Neither letter received a response.

Our members are tired of waiting. The government must act now to protect health care workers in this province. Ontario’s public health guidelines and policies must be updated immediately to reflect the state of global scientific knowledge, and to mandate measures to protect healthcare workers, patients and residents alike from the risk posed by aerosol transmission of SARS-CoV-2.

As you are aware from our prior correspondence, the WHO 1, CDC 2 and the PHAC all have accepted for some months that COVID-19 is spread by various routes, including by aerosols. The government of Canada recognizes this front and center in its Main Modes of Transmission document 3.

In addition, on April 5, 2021, the CDC issued new guidance on fomite transmission stating:

“The principal mode by which people are infected with SARS-CoV-2 (the virus that causes COVID-19) is through exposure to respiratory droplets carrying infectious virus. It is possible for people to be infected through contact with contaminated surfaces or objects (fomites), but the risk is generally considered to be low.”4

On the same date, the ASHRAE Epidemic Task Force released an updated, unequivocal statement on the airborne transmission of SARS-CoV-2 in buildings.

“Airborne transmission of SARS-CoV-2 is significant and should be controlled. Changes to building operations, including the operation of heating, ventilating, and air-conditioning systems, can reduce airborne exposures.“5

Today, the evidence supporting the airborne transmission of SARS-CoV-2 has surpassed the evidence for measles, which is universally accepted to be an airborne disease: 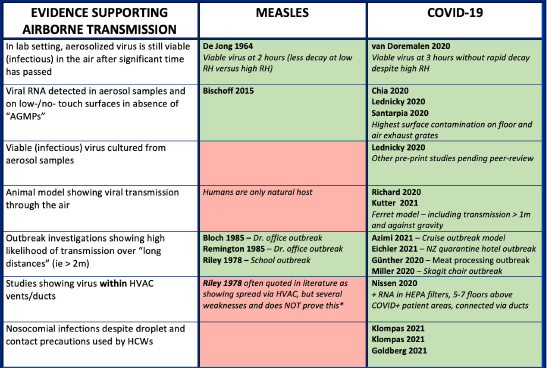 In previous letters to you, we highlighted examples of the continuous stream of evidence supporting airborne spread. The evidence continues to pour in. We highlight just the most recent example: a case study in which a super spreader even in an Australian church in which video recordings of the services demonstrated transmission at distances of approximately 15 meters.6

We are in the throes of the third wave, which is proving even more dangerous than the first two due to the rapid spread of the variants of concern, and yet no efforts have been made to protect health care workers. Cases among the public and health care staff have reached unprecedented levels. Hospitals are full and there are outbreaks in all types of health care facilities in the province. Full immunization is still months away.

At the same time, Ontario no longer faces the kind of PPE shortage that it faced a year ago. Domestic N-95 production is now a reality at 3M’s Brockville facility.7 In Toronto, with its high concentration of hospitals, ICU beds and COVID-19 patients, there is currently an estimated 445-day supply of N-95 respirators available for use,8 a timeline that far exceeds full vaccination of the Canadian public.

In the wake of the SARS Commission Report, Ontario’s official public health policy has been to adhere to the precautionary principle: we must not wait for scientific certainty before taking steps to protect public health.

Despite this, Ontario has refused to default to the highest level of protection for its front-line health care workers and has instead spent over a year denying the existence of aerosol transmission of COVID-19, notwithstanding compelling evidence of it as early as May 2020.

You must update Directive #5 on PPE in Hospitals and Long-Term Care Homes. Health care workers must be provided with the highest level of protection given the evidence of airborne transmission, and all barriers to access must be removed. NIOSH approved, fit-tested N-95 respirators or better protection must be provided to all health care workers who work in areas where there are confirmed, suspected or probable COVID-19 patients, regardless of distance.

As we noted in our letter to the Premier in December: this is no longer a failure to abide by the precautionary principle. This is willful ignorance of the existing evidence. And the people of Ontario are dying because of it.

We await your prompt response.

To see the full letter and sources click here** 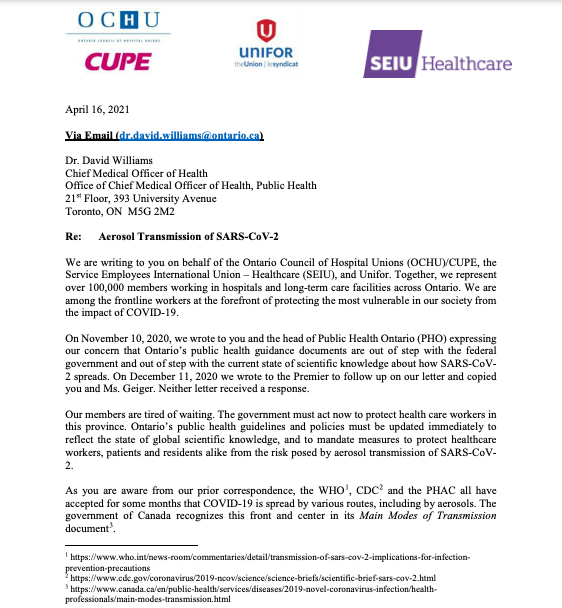 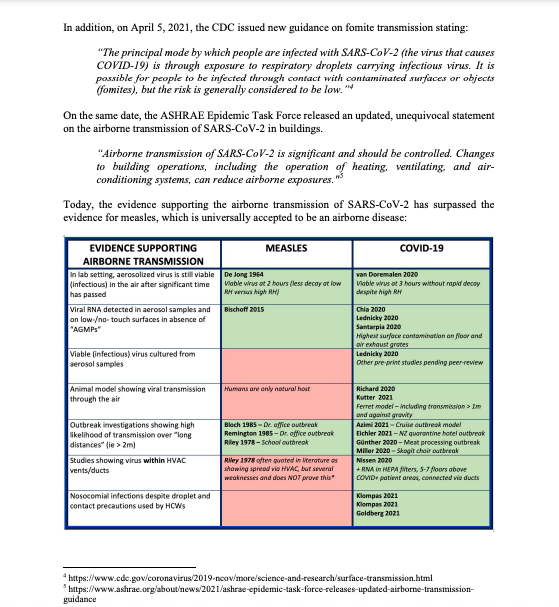 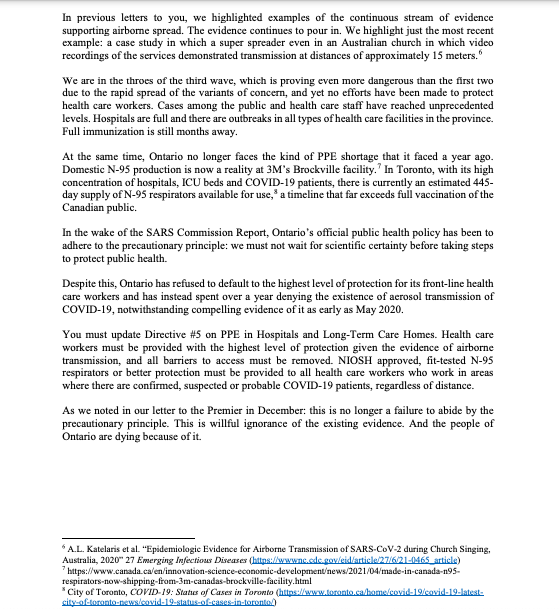 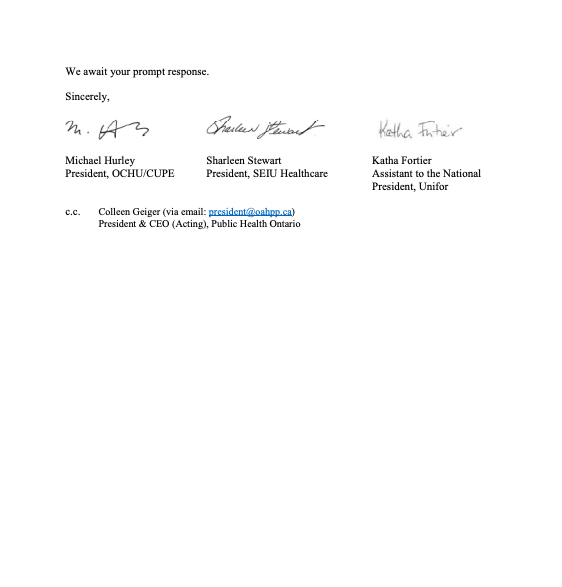